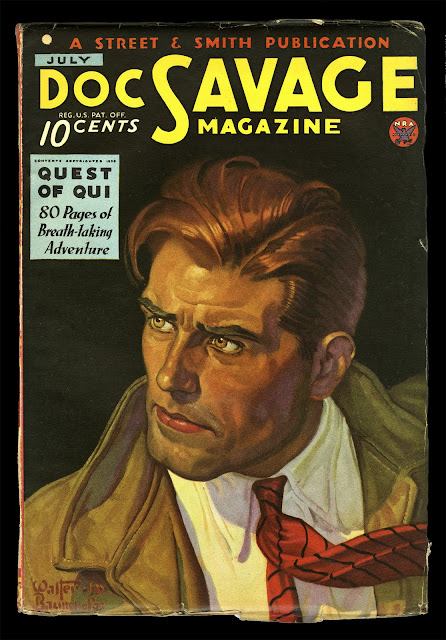 The opening of Quest of Qui is a classic.  A Viking Longship drifts lifelessly alongside an eighty-foot yacht. The passengers and crew of the wealthy ship come out to have a look. Then, startlingly, Vikings pour out of the Longship's hold and swarm the yacht, forcing everyone aboard to trade ships. The yacht cruised to parts unknown and the Longship, after much struggle, arrives at a harbor on the tip of Long Island.

That same night, William Harper Littlejohn was at the movies and saw footage of the ship in a newsreel. His expert eye gave him little doubt that the ship was authentic. He left a message on Doc Savage's answering machine and headed to Long Island in the morning.

Thus begins the 28th supersaga, a story of ice, snow, near freezing and falling in ice crevasses. Oh, and lost civilizations, but you probably already figured that out.

Quest of Qui is more prime goodness from Street and Smith. It was great to see Johnny get the opening scene, using all his archaeological knowledge and to be recognized while he is examining the Longship.

From the scene where Johnny is at the movies - "William Harper Littlejohn was a very erudite gentleman, but he occasionally attended the cinema for relaxation." - we can see that movies then were kind of like television is now. It has the perception of being for the masses, whereas in fact, almost everyone watches TV.

The Hidalgo Trading Company is firebombed, destroying all of Doc's planes.

There is also a rare scene where there is a bit of racism sneaking into the text. Doc asks Ham if he has cold weather clothes. "Brand new," Ham admitted. "Made by the best fur house in the city. No crude Eskimo work on them."

The story also mentions a passenger "Tri-motor biplane." I hadn't heard of such things, but here you go… Well a model of one anyway... 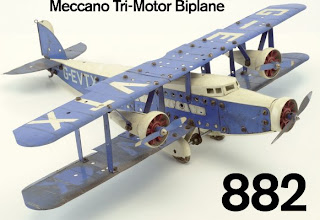 Quest of Qui also features the expression, "Nerts to you!" meaning "you get nothing," or "up yours."

Doc also does one of the most amazing things he has ever done in one of these stories. He shoots the wiring off a plane engine that is circling high overhead. He wanted to bring it down, but at the same time be able to fix the motor and use the plane. That is good shooting!

I'll give Quest of Qui an 8 out of 10. It has some great stuff, but there is way too much floundering in arctic snow. It gets repetitive. And Johnny is wearing just a jacket with blankets wrapped around his feet. While people get cold, there are no repercussions for not being well enough equipped.

The pulp cover by Walter Baumhofer is a head shot of Doc, which may have been created for other purposes and reused here. The pulp interior illustrations are by Paul Orban. 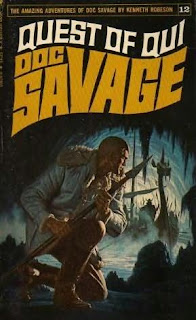 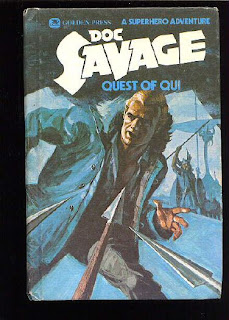 The Bantam paperback cover is by James Bama and is one of the great Doc covers. There was also a Golden Press edition, which has a beautifully composed cover by Ben Otero.
Once again, a big thanks to Chris Kalb's 86th Floor website for the interior illos...