I am back from a near heart-attack inducing hard drive failure. But all my data was recovered and is now fully backed up. Take it from me, it is far cheaper to buy back up drives than to have a data recovery company get it back. Enough of the excuses, back to the main event.

Jackal's Hyenas
This is something new. A Character Sheet for a Special Object Token. My Mercenary, The Jackal, has a pair of trained hyenas as his Special Object. You can find the massive version here. Please note the Special Rules box. 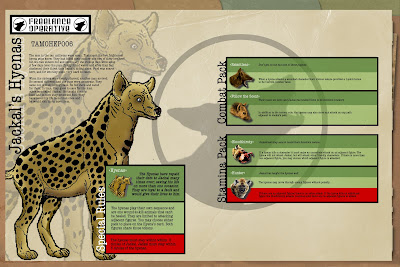 I have also been reworking all of the Moeller's Hermetics cards with art versions instead of photo versions. Here are the Armored Apes, the Rustung Fallhammer. 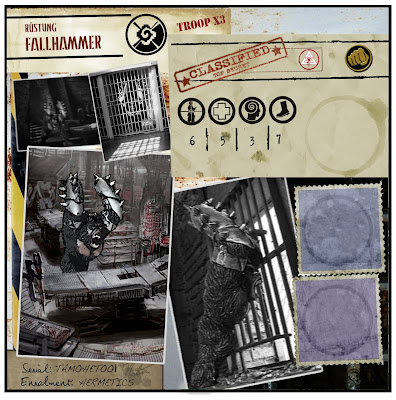 As usual, I would love to hear your comments either here, or at the new and downgraded FFG website. I have been pondering whether to put each weeks announcement in its own thread or not, because I can't add new stuff to the first post of the thread. Adding a post a week adds clutter, but it will be much easier to find the new stuff.

I am getting closer to the end on this massive project (Moeller's Hermetics) and I am interested in what people would like to see in the next big project. I have a single hero to add to the Matriarchy that I will do when the Hermetics are done, but then I have some choices to make.

1. Hellboy and the BPRD full faction all finished.
2. Eastern Dynasties or Rising Sun faction. Full of Kung Fu and eastern magic. Which name do you like better?
3. Creatures from beyond Time and Space.

Let me know your pick!

Farther down the road are Doc Savage and Company, because I have to paint the figures, and some other Pulp heroes.

I'd rather see you finish the BPRD faction. After that, a Chinese or Japanese faction would be great.