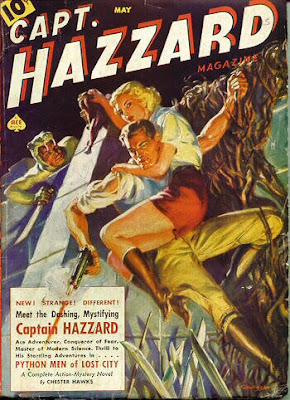 Captain Hazzard is the pulp hero called America's Ace Adventurer in the first and only issue of Captain Hazzard Magazine published in May 1938. Written by Paul Chadwick but published under the house name Chester Hawks, Capt. Hazzard is notorious as a blatant Doc Savage knockoff. John P. Gunnison has reprinted his sole pulp appearance in issue #72 of High Adventure Magazine. If you act quickly, this and many other issues (including some G-8s) are on sale for 3 or 4 dollars!!! As you will read later, modern pulp writer Ron Fortier has picked up the baton and continued the adventures of Capt. Hazzard.

I recently purchased a back issue copy from Adventure House and read Python Men of Lost City on my recent vacation. My other holiday reading consisted of Doc Savage #2, Green Lama #5, and the great book, The Ten-Cent Plague: The Great Comic-Book Scare and How It Changed America. I will be adding reviews of those in the coming days. But today is devoted to Captain Hazzard.

Capt. Hazzard steals elements superficially from Doc Savage. He is rich, handsome and has a team of assistants who set out to right wrongs around the globe. However, the similarity ends there. The assistants are just that; they are hired hands rather than brothers in arms. He has not trained every day since birth to follow in his father's footsteps as an adventurer. He is not a perfect blend of intellectual and physical perfection, but that's OK. He is not the Doc clone that some would make you think. His character is quite different.

Capt. Hazzard was blinded when he was a baby. As a boy he learned Braille pushed all his other senses to their limit. Then he turned his mind inward, developing his mental processes. He studied psychology, yoga, hypnotism, shamanistic powers and telepathy. He developed all his senses far beyond those of ordinary men.

Experimental surgery (Wold-Newtonians probably insist that Doc Savage was the surgeon) restored his sight and Hazzard turned to action, adventure, and enhancing his knowledge about the world around him. He is vastly wealthy, the novel says, "...his brilliant researches and inventions in his Long Island laboratory, as well as his startling world adventures, have brought him not only wealth and fame, but recognition from his government."

Hazzard tests the psychic talents of all prospective employees. Many of his closest associates are the ones that scored highest on the test. He believes that the humanity is on the cusp of a new age of telepathy, mind reading, and other psychic powers and that he is the pioneer in the field.

Crandall - Pilot- Gets Catapult Plane ready. He has no first (or is it last?) name and no telepathic abilities are in evidence.

Martin Tracey - Asked to get the Silver Bullet plane ready telepathically. In one section is called Lacey. He has a line or two of character, but not much.

Jake Cole has "straw-blonde hair, deadpan face, ungainly hands", a broken nose, gum chewer, and is a wizard with a lasso, "He could shoot like an Apache with rifle or six-gun" and is an expert tracker. Jake has no extra-sensory perception, no knowledge of science or math and "an auto engine was a deep enigma to him." He is a hired gun that has more character than anyone except Hazzard and Mary Parker.

The use of telepathy and ESP is what makes Capt. Hazzard unique. He communicates with his assistants telepathically. He can see through their eyes and give them telepathic orders. It is the use of these mental powers that separates Hazzard from other pulp heroes. It was the most refreshing thing about the novel.

The story opens with the death of a man on the waterfront, killed by a mysterious device that projects a deadly curtain of energy between two antennas. Crawley, a newspaper reporter on Hazzard's payroll, witnesses the event and opens mental communication with Hazzard in time for the hero to see the deadly effect of the atomic field. The dead man was carrying a distress message from the industrialist Mr. Parker who is trapped in Central America by the mysterious Phoenix.

Hazzard races to the the Parker home, fearing for the family's safety and to tell them of Mr. Parker's message. Capt. Hazzard reaches the house and meets the young and attractive Mary Parker. They are attacked and barely escape with their lives. There are more harrowing escapes and then Hazzard, his men, and Miss Parker are taking off in the Silver Bullet, Hazzard's single wing speed plane. They fly to Guatemala where Mary's father is being held prisoner.

The plane is attacked, but they escape by using the L.O., a liquid oxygen powered rocket motor that rises up out of the fuselage of the Silver Bullet. The heroes arrive in the south american jungle and realize that the Phoenix's secret lair is inside a volcano. After a series of traps and escapes, the Phoenix is foiled and his horrifying scheme is put to rest.

I have to say that the writing isn't terribly good. Much of it is terrible. That may be a large part of the failure of the magazine. The story is credited to Chester Hawks, a house name at Magazine Publishers. It was actually written by Paul Chadwick.

Wikipedia says:
"Paul Chadwick was a pulp magazine author who wrote many stories under his own name and various pseudonyms. As was the case with many prolific contributors to the pulps, he wrote in a number of different genres including detective stories, science fiction and westerns. He wrote stories for the magazine Secret Agent X under the "house name" of Brant House, and also wrote the one and only issue of the Doc Savage clone Captain Hazzard (May 1938) under the name of Chester Hawks. Many of Chadwick's detective stories feature the hardboiled character Wade Hammond, who first appeared in Ten Detective Aces magazine in 1934."

The story races from one cliff-hanger to the next, but really isn't that exciting. I was not enthralled or involved in the tale. Other than Capt. Hazzard and Miss Parker, none of the characters have much to offer the reader. They are flat and uninteresting, in one case even changing names back and forth mid-story. The Phoenix has little motivation beyond greed and being insane, but I guess that's enough. Coincidentally, this and Doc Savage #2 "The Land of Terror" that I read the same week both featured volcanos in the stories. In this case the Phoenix is getting power from the volcano.

The basic set-up is fairly good and the telepathic and mental powers make Hazzard interesting. Mary Parker is a good character, full of spunk and has some good moments. Hopefully she continues along with the new adventures. The little hints of romance; a soft touch here, a look there were refreshing as well. Without Miss Parker, the tale would have been very dry indeed. Sadly, I cannot recommend Capt. Hazzard #1. You can find the Adventure House reprint on their site, but it is not worth it. It is currently on sale for $3. They do have many other great pulps, though, so check out their sale.

I give this novel a score of 1 out of 10. It is possibly the worst book I have read, however, the basic premise and set-up has value. 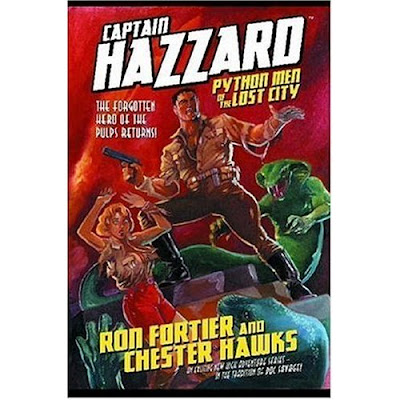 There is a reason that the original magazine never made it past the first issue. It is bad. However, modern pulp writer Ron Fortier has breathed new life into the character and along with co-writer Martin Powell has written some new tales of the copyright-expired Hazzard. Hopefully their work will realize the potential of this interesting but poorly executed original.

Mr. Fortier started with the first issue and re-wrote it from word one. In a recent email he said, "When I finally decided to realize my dream of becoming a pulp writer, I let it be known I was going to do new Captain Hazzard adventures. Then, before getting started on such, I opted to re-write the horribly written Python Men of the Lost City." 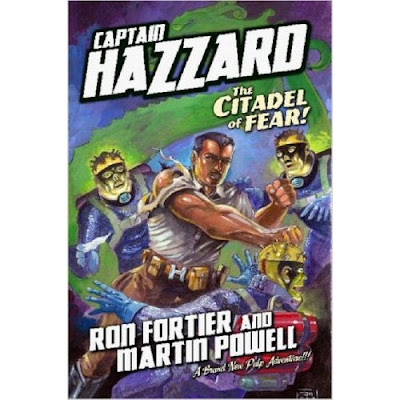 He finished the rewrite and it was published. It did well enough that Fortier was ready to write an original Hazzard novel. Ron said, "So my pal, Martin Powell and me, started work soon after (publication of the rewritten #1) on the first all new Hazzard, Citadel of Fear. We were half-way through that when pulp fan Don O'Malley writes me asking if I have plans of some day tackling the second (pulp original) Hazzard novel?"

Ron Fortier is confused because there was never a second issue of Capt. Hazzard published. But there was one written. Ron explains, "When the editors asked Paul Chadwick to write Captain Hazzard, they told him he would be competition for Doc Savage. Chadwick turned in book #1, Python Men of the Lost City, and then proceeded to write the second adventure. Lo and behold #1 is published, but then immediately canceled. Yet Chadwick has already turned in a second script. The editors were committed to paying for it and there was no way they were not going to get some use out of it. Sooo...they handed it back to Chadwick and told him to go home and turn it into a Secret Agent X story. X being their most popular pulp hero ever. Chadwick goes home, does the dirty deed and turns in a story called, Curse of the Crimson Horde, which appear the following year, 1939, in Secret Agent X." 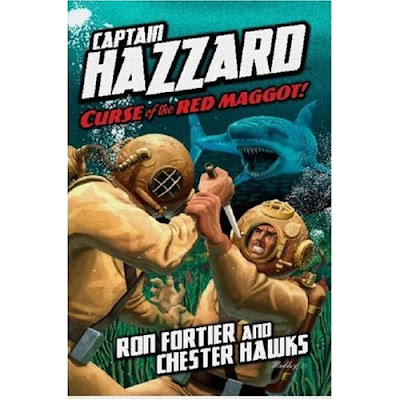 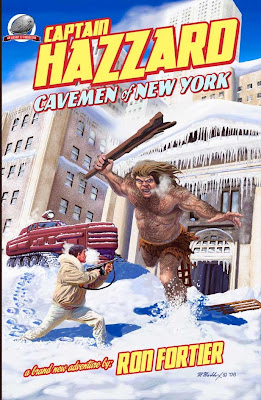 You can check out all the Ron Fortier News at Airship 27 or at The Pulp Factory. Amazon has many of Ron's books. The Hazzard books are available at Lulu. Currently only Hazzard #3 and #4 are available, but Ron says that reprints of #1 and #2 are in the works. I look forward to reading them.