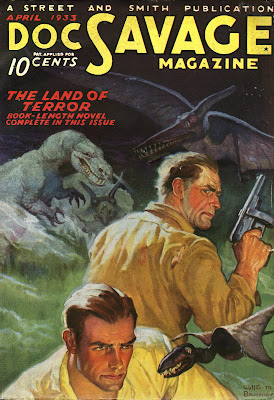 OK, I'll get this out of the way right now. The Land of Terror by Lester Dent (published under the house name Kenneth Robeson) has Doc Savage fighting dinosaurs. We see that right on the cover of the Original Pulp; one of my favorite Walter Baumhofer paintings.

Dinosaurs are also on the cover of the Bantam reprint (not one of my favorite covers). 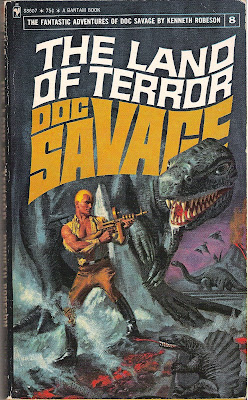 Everyone reading this super-saga knows that somehow Doc is going to get to fight dinosaurs. So why does it take so darn long to get there?

The Land of Terror starts well, with a mentor and friend of Doc Savage being murdered in a horribly weird way by a gang of killers. Doc just misses catching them. He worries about the method of the killing and set out to find the killer. Along the way he enlists the aid of an old friend of his father.

He tracks the killers to a run-down tourist attraction - a pirate ship, complete with death traps and bodies - real and fake.

The story takes us back and forth to this ship at least two too many times. Doc does get in some brutal killings; shootings, neck-snappings, that kind of stuff. Doc is a killing machine in this novel if he or others are threatened with lethal force. This goes on for about 80 pages. Doc Savage's 'Crime College' is briefly mentioned as a place where criminals are rehabilitated in upstate New York.

Finally, Doc and his men head to a mysterious island in the South Pacific. The island is where the dinosaurs are. Here the story finally kicks into gear and is quite fun. The dinosaurs are quite terrifying and well described. The story ends well, but I just don't get why Lester Dent spent so much time away from the Land of Terror.

For this review I read my copy of the Bantam paperback - 6th printing circa 1974. For some unknown reason, the Bantam paperbacks and the 2-in-1 Nostalgia Ventures reprints do not follow the original publication order. That is the order that is commonly preferred, but recently some Doc Savage fans have been recommending reading the stories in the order they were originally submitted to the publisher. That order follows the published sequence for the most part, especially in the beginning. I will be reading in that order.