DC Comic Will Feature
Pulp Heroes
DC Comics is preparing to launch a stand alone series titled, First Wave, that will feature Doc Savage, the Avenger, the Spirit, and other characters from the era of Heroic Pulp magazines. The series will take place in a new universe where super-powered characters do not exist. Brian Azzarello (100 Bullets) is the writer and Rags Morales (JSA) is the artist. The book is expected to launch later this year. 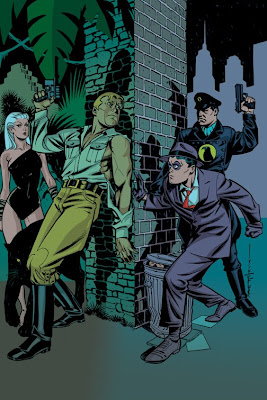 Newsarama has posted an interview with artist Rags Morales that provides some insight into the series. Morales explains the premise, "It's a world of heroism at its most innocent... We're talking about the heart and soul of what it means to be heroic, where people are left more to their wits... than any fierce other-worldly technology..."

Morales explains that the world is like our own and like the 1930s. There are computers, but there are also Fedoras. There are airships and jets, gangsters and babes. A retro modern style.

"Doc Savage won't have that exaggerated widow's peak, but I'm going with the classic looks on the characters with some updating," Morales explains. "He's an inventor, and he's got a very moral ethic. In a world of non-powered heroes, he's going to be our focal point."

"The Spirit along with Doc Savage will provide an interesting combination, because Denny will be played with a little more humor. And The Avenger's going to be this grizzly kind of Tommy Lee Jones character. He'll be a little more heavy handed, but at the same time, he has a high moral ethic," Morales says.

Additionally, Rags Morales explains that, "Well, theoretically, any non-powered DC hero could show up in this world and have some form of involvement. And there are some characters that we're going to address that are going to be reinvented, one of which is a very cool villain who's going to get a makeover."

I have high hopes for this series and hope that there will be additional information at San Diego Comic-Con. Last year Warner Bros announced a new Doc Savage movie and we have heard nothing since. I'll be at Comic-Con and hope to post further reports.
Posted by Pete Miller at 9:43 PM

Doesn't DC own the rights to The Shadow? He needs to be introduced into this concept!

The First Wave series kicked off with a Batman/Doc Savage Special one-shot. For all intents and purposes, The Batman is The Shadow of the DC Universe. Having both characters might prove difficult if not embarassing for DC, especially given that The Batman now serves as a continuity link between the First Wave heroes and the rest of the DC Universe.

But there's already been a Batman/The Shadow crossover comic before in the mid 1970s so what's stopping them this time around? Anyway, the Batman, though partially a rip-off of the Shadow, is closer to the Black Bat seeing that there was a huge lawsuit in the thirties over copyright. Anyway, they've done it before so why not again?