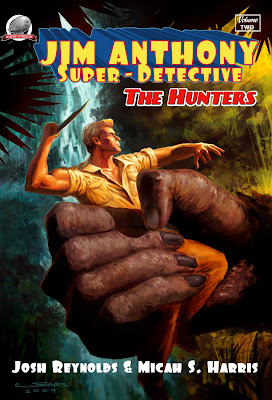 Airship 27 Productions and Cornerstone Book Publishers today announced the release of "JIM ANTHONY – SUPER DETECTIVE Vol. Two – THE HUNTERS." This is a novel in two parts written by Josh Reynolds and Micah S. Harris.
From the Press Release:
"Classic pulp hero, Jim Anthony, Super Detective returns in a brand new novel that pits him against all kinds of strange and legendary beasts. And in both cases he is accompanied by fanatical hunter, Russian Count Zaroff from the classic short story, The Most Dangerous Game by Richard Connell.
In part one, Death In Yellow, by Joshua Reynolds, Anthony and Zaroff square off against a group of savage Tibetan Yetis loose in the steel canyons of Manhattan. Why these creatures are here and who is behind their murderous rampage is a classic mystery that challenges the one and only Super Detective. Then in part two, On The Periphery of Legend, by Micah S. Harris, Anthony reluctantly accompanies the mad Russian on an expedition to a lost island in the South Pacific where dinosaurs still roam. But that’s not the most dangerous game in those time lost jungles.
Here are two amazing tales woven together into a classic pulp adventure that will test the mettle of our hero and his loyal companions! Airship 27 Productions is thrilled to present JIM ANTHONY – SUPER DETECTIVE Vol. Two – THE HUNTERS! Features interior illustrations by Pedro Cruz and a stunning cover by Chris Sears. Airship 27 Productions – Pulp Fiction For a New Generation!
ISBN: 1-934935-70-0
ISBN 13: 978-1-934935-70-5
Produced by Airship 27
Published by Cornerstone Book Publishers

The book is available through Amazon or discounted directly from Airship 27.
Posted by Pete Miller at 10:44 AM

They had me at Harris' name. He's a great author and I strongly look foreward to reading this.

Because who else is writing about Tarzan fighting Lovecraftian gods, or Solomon Kane encountering the Horla?

If you haven't already, check out his The Eldritch New Adventures of Becky Sharp, great fun neo-pulp novel.

I promise he's not paying me to say all this.