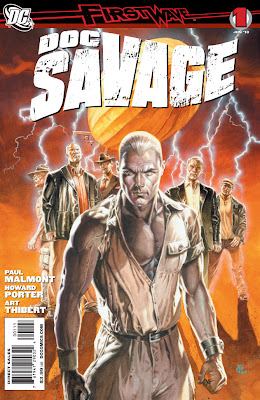 I really wish the news was better. I am in the middle of reading "The Chinatown Deathcloud Peril" by Paul Malmont. This is a great pulp adventure novel which ingeniously puts a mess of actual pulp authors in the middle of a pulp story in the 1930s. Lester Dent (Doc Savage), Walter Gibson (The Shadow), HP Lovecraft (Weird Tales), and others are characters in this fun novel.

I hoped that Doc Savage #1 would be an improvement over "First Wave" #1 (also featuring Doc Savage) but it isn't. One of the ideas behind the First Wave Universe was that it would be hard to pin down the time. There would be elements of the 1930s mixed in with the modern. Think speakeasies and cel phones. The only element that this isn't a contemporary, our world, New York City is the fact that Doc Savage drives an airship. In this issue, that's it. Everything else is completely our world.

I suppose that isn't Malmont's fault. The artist, Howard Porter, didn't put any of the world that the "First Wave" book put in. Additionally, the art just isn't very good. In fact, the script is probably OK, but the art ruins it.

The issue starts with a one page conclusion of an African desert rescue. A shirt-ripped Doc beats up a pair of lions and rescues the girl. We don't know or care who she is. Some cops take away the villain and Doc's airship is in the background. 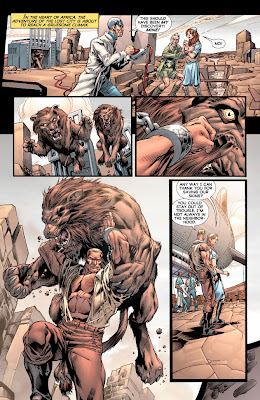 Turn the page and Doc is piloting the airship into Manhattan. He is still in the same ripped up clothes from Africa. I guess he has no other clothes on his ship, or maybe his shirts just come pre-ripped to save him the trouble of shredding them.

Doc rescues some kids as his airship and the Empire State Building are under attack by lightning. We see the airship burning up as it goes down. Why? Is it hydrogen? Is the outer skin flammable?

That is just the first five pages.

I think if the art would have introduced us to the pulp-ish unique alternate universe that First Wave is supposed to be then this would have all played much better. Doc and his men seem like themselves (well, Long Tom is married) but in a modern setting. Some fans have complained that Doc is too talky and not stoic enough, but in my rereading of the original pulp series so far, I don't find him stoic at all.

Physically, Monk is the most off from the pulp descriptions. Long Tom and Johnny are rather plain.

The issue sets up the story of a madman trying to kill Doc and his men. We'll see how that plays out.

As it is, I liked "First Wave" #1 better, and I didn't think that one was great. Now that Columbia has the rights to the Doc Savage movie, is Warner Bros trying to torpedo the character?

The Doc Savage story occupies 20 pages and is followed by the "Justice, Inc." back up feature. This is a 10 page story featuring The Avenger. I liked this story much better. The art is good and the characters are interesting. I have not read an Avenger stories in over 30 years, so I am not too familiar with the characters. The Avenger fan base seems to feel they have wrecked the characters, but I thought it started a pretty good story. Scott Hampton's beautifully noir art is wonderfully enhanced by Daniel Vozzo's dark and moody colors.

I liked this back-up quite a bit, but there still isn't a thing that isn't just contemporary New York City. 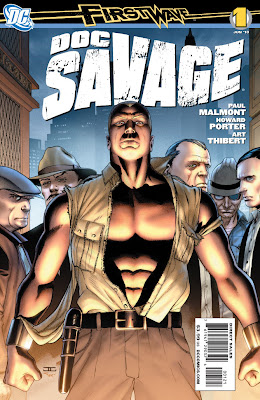 RANT
Four bucks. That is the price of a DC comic these days. Maybe they need to rethink this. Perhaps they could have put an ad between the two stories. There are ads on the insides of the covers and on the back cover, but other wise there are no paid ads in this book. There are 2 pages for non-profits (literacy and the Red Cross) and 3 pages of DC ads. There is a 5 page b&w Zatanna preview that outshines the Doc Savage main story. I really wish they could get in some paid ads and drop the price a little.
Posted by Pete Miller at 10:59 PM