Pulp of the Week - Author Spotlight Interview - Diving Into the Wreck 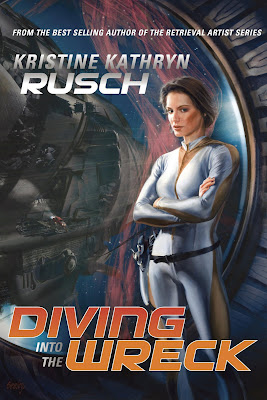 Diving Into the Wreck
Written by Kristine Kathryn Rusch
Cover painting by Dave Seeley
I picked up this book after hearing an interview with Kristine Rusch on the Dragon Page: Cover to Cover podcast in January 2010. The author described the story as a throwback to good, solid SF. Space adventure fiction. Well, that is something I like, and after reading Diving Into the Wreck, I know she is absolutely right.

While the book echoes back to classic adventure stories like the Chanur series by CJ Cherryh, Arthur C. Clarke's A Fall of Moondust, and Lester Del Rey's Attack From Atlantis (the first SF book I read as a boy), it is also a completely modern piece of SF.

Rusch's tale follows a 'wreck diver' - adventurers that explore and salvage ancient starships. She is known only by her nickname, Boss. Through fluke circumstances she discovers a Dignity Vessel - a type of ship made long, long ago in Earth orbit and containing Stealth technology. In the intervening 5000 years that technology has been lost and the ship is impossibly far from Earth - no ship of that era was ever known to have ventured out that far - so how did it get there?

The secrets of Stealth tech are extremely valuable and eventually people find out what Boss is up to. A mysterious woman named Riya Trekov convinces Boss (with an epic pile of cash) to travel to the legendary Room of Lost Souls where Riya's father disappeared. This oddity in space has a place in Boss' past, too and she reluctantly agrees to go. After all, she already agreed to the mission and took the money.

What follows is a terrific adventure exploring the Dignity Ship, the bizarre Room of Lost Souls, as well as Boss' past and her relationship with her father.

The story is well written, the great characters are faced with surprisingly large personal stakes. The book is written in first person from Boss' perspective. It took me a while to realize that it was also written in present tense - my natural writing voice. Kristine Rusch's Boss has a strong and consistent voice that I really enjoyed.

Before I started reading, I noticed that portions of the book had previously been published "in different form" in Asimov's Science Fiction Magazine. When I finished the first part and started the second, I was disappointed because it seemed that I was started on a separate novella with Boss. I flipped ahead and sure enough there was a third part. I was thinking that three novellas had been packaged as a book.

However, it soon became obvious that the parts were inexorably linked together and the book was indeed one story.

The sequel is out now... 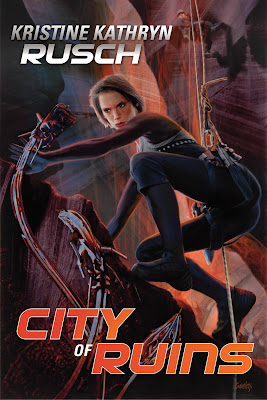 Kristine Rusch can be found online here and the artist Dave Seeley's site is here.

I took the opportunity to ask Kristine Kathryn Rusch a few questions about writing and Diving into the Wreck.


The book is written in an interesting style. You have chosen first person present tense. What led to the decision to write the story this way?
Here’s some mystical writer talk.  My characters dictate how I tell a story.  And this one had to be first person present tense because Boss tries very hard to only live in the present.
I have used that style and received negative feedback on it. People (online reviewers) say that cyberpunk killed it, which I find ridiculous, but I am wondering if you have gotten a reaction to writing or publishing present tense stories as a author or editor.
Here’s what I think:  Conventional wisdom is hooey.  If the story demands present tense, write in present tense.  If it demands past tense, write in past.  Clearly the people who are complaining to you don’t read outside of the sf genre.  Mainstream novels (which some call “literary” novels, as if other novels aren’t literary) use present tense all the time. So do bestselling novelists, like Robert Crais, who switches from first to third person, present tense to past, within the same book.  If readers didn’t like that technique, then he wouldn’t be a bestselling writer.

Writers have to write their stories.  Readers will decide if the stories work. Writers who write according to criticism end up diluting their stories until the stories aren’t theirs any more.

But that’s just my opinion.  I’ve written that way my whole life, and it works for me. :-)
I may be wrong about this, but as far as I can tell, you never name the main character and the other characters only refer to her as, "Boss." What led to that choice?
Again, mystical writers talk. She never told me her name.  In fact, I just finished up the third book, Boneyards, and I was going to have a big reveal scene where you learned her name.  I came to the scene and couldn’t write it.  I may never know her name, and if I don’t know, the readers won’t know either.
So now we know that Kris is not holding back the name from us; Boss is holding it back from Kris.
After finishing the Room of Lost Souls why did you not submit the third part to Asimov's?

I don’t write in order for one thing, so the next thing I wrote was the opening section of City of Ruins (where Boss & crew go to Vaycehn).  Then I wrote another section of City. Then I wrote the end of Diving, and it doesn’t stand alone like the original novella and Room of Lost Souls. That opening section of City doesn’t stand alone either, but the next section did, and just appeared as Becoming One With The Ghosts in Asimov’s.  Then I wrote yet another novella as background, and that became Becalmed, also in Asimov’s.  Only so far, Becalmed is not part of any upcoming novel.

How different are the first two parts from the version that is in Asimov's?
Very different. They’re much more fleshed out, more setting, more background, more detail, and a bit more plot.
Well, as I mentioned in my note, I was going to ask if there was a sequel in the offing, but now I already know it is. Could you tell us about that and if the sequel was planned before Diving Into the Wreck was published?

Oh, yes. This is a very big world, and I have a lot of stories to tell.
Can you give a little tease about City of Ruins?

City of Ruins takes place five years after Diving.  City does stand alone, so readers can start there if they want.  (I’d still recommend starting with Diving, though.)  Boss & crew make a discovery on a planet called Wyr that changes everything in their universe—and I do mean everything.
Thanks you Kris, I appreciate the time an interview takes out of an author's day and I'm looking forward to City of Ruins and Boneyards. If my readers are headed to Amazon to buy these, please use the link at the top of the blog.
I have been reading Kristine's husband Dean Wesley Smith's blog and their thoughts on writing and the state of publishing are fascinating and appreciated.