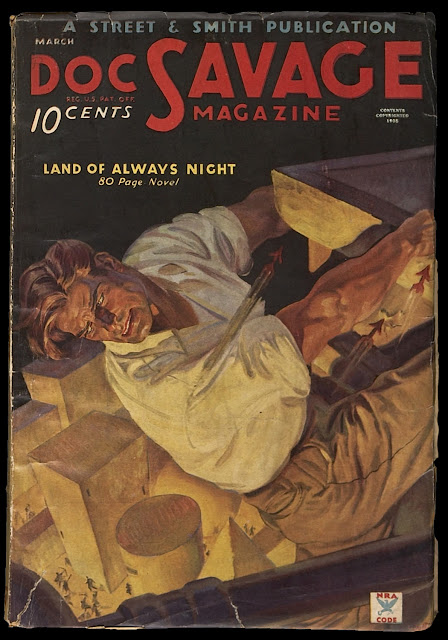 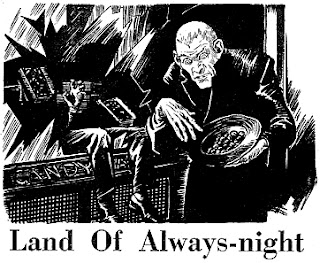 The Land of Always Night is another terrific read and this time out, it is not  a (primarily) Lester Dent tale. This story was written by Ryerson Johnson stepping in as Kenneth Robeson with Dent editing and providing about a third of the book according to Bobb Cotter's A History of the Doc Savage Adventures. In this story a mysterious pair of goggles draws a lot of attention after a hood is ruthlessly killed. The goggles have thick lenses "the size of a small can of condensed milk" that are black as pitch.

These goggles, and the strange white skinned Ool that desperately wants them back, lead to a bizarre civilization hidden under the arctic ice. 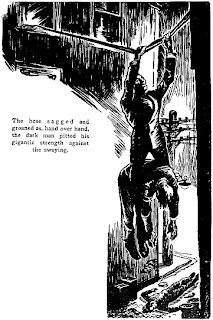 This is truly a lost world novel as the underground dwellers have evolved radically differently than we have. They have an entire technologically superior, yet socially stunted, civilization based underground, away from the frigid arctic temperatures. Much of their structures and items are made from a plastic generated from processed fungus. 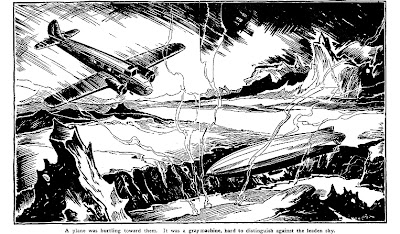 The story features the full cast and a native beauty named Sona as well. It is explained that Long Tom got his nickname "after a disastrous experience in trying to make use of a rusted 'long tom' cannon of buccaneer vintage."

The Land of Always Night is full of big SF ideas, from Doc's streamlined dirigible that uses a non-flammable gas with greater lifting power than hydrogen, to the lost society with towering geometric structures hidden in the caverns. There is "cold light" technology and the society of workers and elites reminded me of the classic SF films "Metropolis" and "Things to Come." 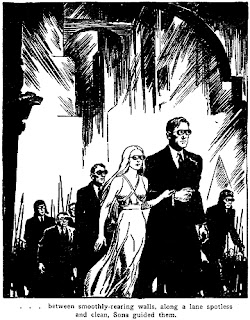 Even before looking I could tell that Dent was not the author of this one. Not that it was better or worse, it was just different. Kind of refreshing, and interesting that this lost advanced civilization novel came from Ryerson Johnson, a man most associated with westerns.

In an interview Johnson  said, "I never could spell good. I had sold maybe a dozen stories to Western Stories and I wandered in to talk to the editor. And the publisher comes in and I'm introduced and he says."Oh, yeah boy you write a good story but your spelling is terrible." I must have looked downhearted at that, because he says, "Oh, don't worry, don't worry, we can get Welsley girls and Harvard boys to fix the spelling. Just keep sending us those good stories." 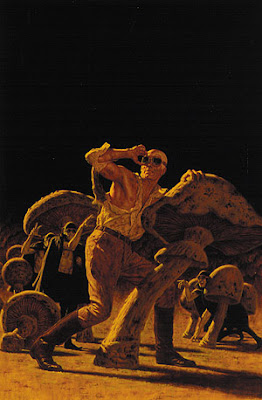 Well, this is one of those good stories. I give Land of Always-Night an 9 out of 10. The pulp cover is by Walter Baumhofer and the Bantam paperback is by James Bama, goggles, mushrooms, creepy underground dwellers, and all. 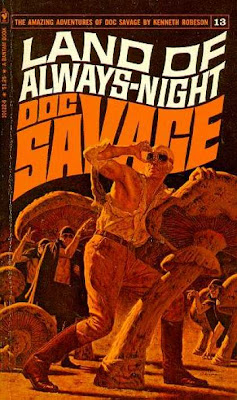 As a fan of Doc Savage, I'm sure you'll be excited to hear that all of Will Murray's earlier Doc Savage novels are currently being adapted into audiobooks by Radio Archives. You can read about them on our website at www.RadioArchives.com.