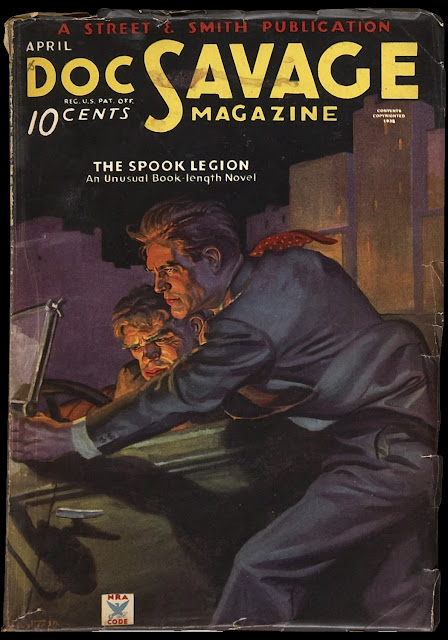 APRIL 1935 - THE SPOOK LEGION
Here is another science fiction Doc Savage novel, this one written by Lester Dent. In The Spook Legion, a criminal genius has perfected a technique for rendering people invisible and is using it to unleash a crime wave upon Manhattan.

Doc and Monk get in on the fun and are made invisible very early in the novel. The Spook Legion cleverly gets Doc pegged as the mastermind early on and it causes Doc, Monk, and Ham no end of trouble.

Dent has a bit of fun as Doc and Monk are cavorting about New York completely naked for much of the book. It leads to a few awkward moments.

Monk utters the title of the novel in a bit of dialog, which was nice and this story also reveals a secret entrance to Doc's 86th floor headquarters via a secret ladder on the 85th floor.

The gang successfully pulls off the crime wave and all New York is on the lookout for the invisible gang. They are going to pull up stakes and head to Chicago next, if Doc can't stop them.

Well, what do you think happened?

For this review I read my quite beat up Bantam paperback #16, published March, 1967. I guess I bought it used as Carey Champoux wrote his name on the inside of both the front and back covers. 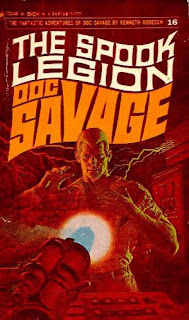 I give The Spook Legion an 9 out of 10. This is one of "the good ones." Having the rest of the Fab Five absent allows Dent to give full support time to Monk and Ham. Even Habias (Monk's pig) has a good role in this one. The pulp cover by Walter Baumhofer is quite famous as it was used for the cover of Philip Jose Farmer's biography, "Doc Savage: His Apocalyptic Life." The Bantam cover is by James Bama.
.
.
Posted by Pete Miller at 1:58 PM