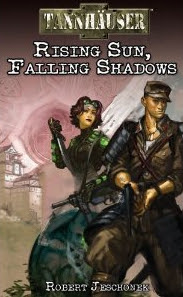 I saw this first on Miah's blog, but Amazon is pre-selling a Tannhäuser novel! I find it odd that I saw nothing at the FFG booth at GenCon, but it is up at Amazon with a Nov. 22 release date. Maybe it was part of the big FFG presentation at the show.
Anyway, here is the description from Amazon:
"The year is 1954, and in a dark and violent alternate history, the Great War never ended. The forces of the Reich, led by the occult-obsessed Kaiser, have sold their souls to demonic powers as they scour the earth in search of paranormal weaponry.
Meanwhile, President Edison has sanctioned the use of potent alien technology recovered at Roswell, in hopes of aiding the beleaguered Union in its fight against tyranny. As the war rages on, can anything - or anyone - tip the balance of power?
Enter the Shogunate, a far-eastern warrior sect with their own shadowy agenda. When a small force led by "The Daimyo" Iroh Minamoto sets out toward the evergreen peninsula of Kamchatka, Union Major John McNeal and the 42nd Marines must discover their plans before it's too late.
To make matters worse, the nefarious Hermann Von Heizinger of the Reich's Obscura Korps seems to be in league with the Shogunate. The race is on to control a weapon that could finally bring the Great War to its climactic end!"
The writer, Robert Jeschonek, has a number of published novels including a couple of Star Trek tie ins and some thriller. Hopefully, the book will be good. After all, there is plenty of good worldbuilding already done in the Tannhäuser universe and a wealth of heroic characters. You can check out his website here.
.
.
Posted by Pete Miller at 5:51 PM