Pulp of the Week - Mockingjay

The third book in the Hunger Games trilogy, Mockingjay, is a mixture of sweet and surprising, thrilling and frustrating. All in all, it is a solid final chapter to her terrific dystopian science fiction series. Once again, the YA section of the book business comes through and is doing some of the best storytelling.

If you have not read these books, stop here. There be SPOILERS AHEAD. 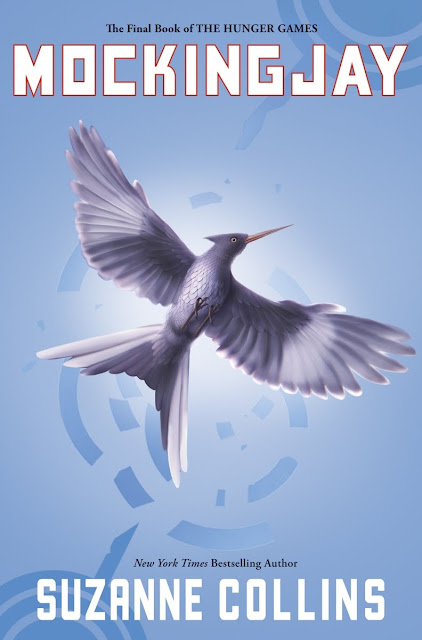 Mockingjay follows Katniss Everdeen into the underground world of District 13 and into the Capitol itself. She embraces her destiny and takes on the iconic role of the Mockingjay, that avatar of hope for the people of Panem. She trains as a warrior with Gale and goes into battle (mostly for the propaganda cameras) and takes the battle to the Capital.

She gets aid from people in the capitol and the freedom movement has spread there. A lonely shopkeeper hides them for a time and I can't help but visualize her as Eartha Kitt. A lovely character.

I feel that while Collins' writing is strong, like many third acts, it all sort of feels like a slog to the final showdown between her and the President Snow. But then the book finds some new life and I found their encounter both somewhat baffling, and yet somehow satisfying. The book ends in a somber tone, but after what Katniss has been through, I guess it is appropriate. She is changed forever and war is Hell.

I read the family's hardcover of Mockingjay and will give it an 8 out of 10. It really is a different kind of book than the others. Once again, the cover art is by Tim O'Brien and the cover design is by Elizabeth B. Parisi.

This book is a bit rough for kids (it is really dark) and was not as satisfying as the previous 2 novels, but does have some good material in it. I'm looking forward to seeing what they do with the film adaptations.