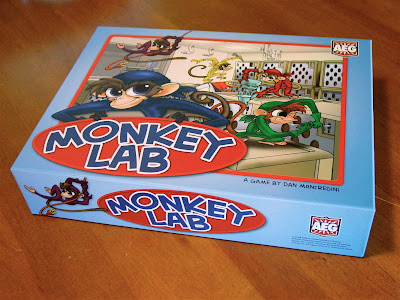 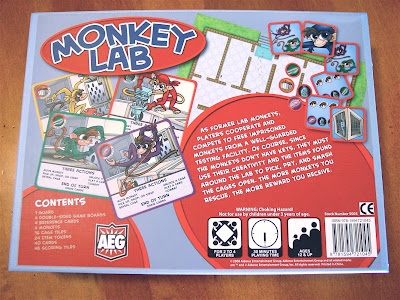 Monkey Lab was released as part of AEG's initial flurry of board games in 2009. Designed by Dan Manfredini, it is a nice family game that requires planning ahead and has just enough randomness to make it unpredictable. The planning comes from plotting your moves and using your cards in hand. The factors against you are the other players and the hidden objectives. 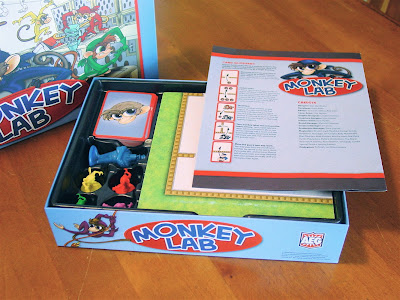 Each player gets one of the monkey figures and places it in the lobby of the wicked research lab where they have already escaped. Your goal is to open up cages and rescue as many other monkeys as possible. To reveal the contents a cage, you flip the token and reveal the number on monkeys in the cage as well as the items required to be in the room in order to bust those monkeys out. 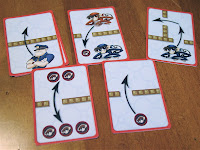 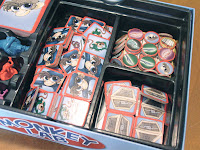 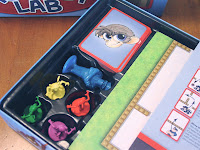 The game comes with four double sided map tiles which can be put together in a large number of ways. After laying out the board, you mix up the crate tokens and put one in each room. (The game comes with more crate tokens than there are rooms.) Then you mix up the item tokens and place two of them face down in each room. Finally, you flip all the item tokens over, put the monkeys in the lobby, and put the security guard just outside the door.

Each player gets three cards in their hand and can take three actions per turn. The possible actions are to move to an adjacent room, pick up, drop, or swap an item (you may only have one), play a card, fight another monkey, reveal a cage, or open the cage (if you possess the proper combination of items.)
The cards let you move the guard to any room, take an item from another monkey, move your monkey two rooms, swap all the items between rooms, or move one item into your room from another room. There are only five different cards, so there is a good chance you will have the one you want. 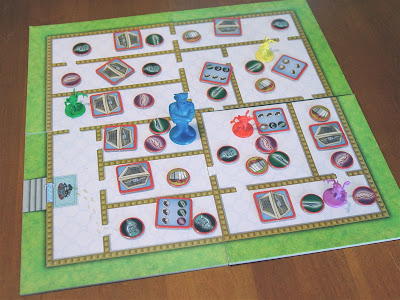 The guard can be pesky because if you finish an action and are in the same room as the guard, your turn ends. So you are trying to move to a room, reveal which items the crate needs to open it, get those items to that room, and still have an action left to open it. That would be easy if there were no other players trying to mess up your plans.
However, all the other players are waiting for you to make a mistake, like opening a crate at the end of your turn.  They'll see what they need and swoop in. Each monkey is allowed to carry one item at a time. If your monkey has the item pictured in the corner of their card, you can fight the other monkeys in your room. If you win, the other monkey drops their item and you get to put the losing monkey in any room on the map!
To win you have to use your cards well, plan your moves, and be ready to swipe the crates other players have revealed. There is quite a bit of 'take that' in this game and that adds to the fun. All kids may not quite see it that way, however, especially the younger ones. AEG has rated this game 12 and up, but my 8-year old played just fine. I think their rating had to do with the theme itself (caged research monkeys) as well as the ability to mess with the other player's plans.
Monkey Lab is a fun, fast game that involves puzzle solving and planning ahead. I enjoyed this game and so did the kids.
Behind The Game 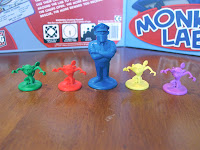 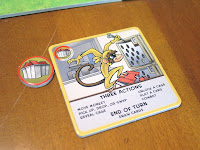 I took the opportunity to ask Todd Rowland, Senior Brand Manager at AEG, and Designer Dan Manfredini some questions about the game.

How did Monkey Lab come to your attention?
Todd Rowland - Monkey Lab was brought to us by Jim Pinto, who knew the designer.  We tried it out and liked the game so we went with it.  It was in our early days of "hrm, what do we publish now that we want to try board games" but it was the right choice!
Was the game finished, or did you spend a lot of time developing it?
Todd - It came to us pretty much finished. These days we generally look for out of house games that are around 80-90% finished so we can put our own polish on them, but this one luckily came in ready to go. 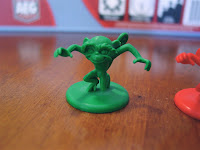 How did AEG end up as the publisher? Did you bring them the design, or did they seek you out?
Dan Manfredini- After a lot of rejected submissions, I was beginning to feel a bit worn out. But then luck hit! My friend offered me a tip that AEG was branching out into board games and that they were accepting design submissions. I hopped to it and submitted a few designs. Within a few days, they responded and they enthusiastically wanted to publish Monkey Lab. I was ecstatic!
Once AEG had the design, how long did it take to see it through graphic design and production? Did you have any input in this?
Dan - Once they decided to print the game, I sent them a list of notes about my opinion on components and how I thought the game would look. After a few months, I started receiving preliminary art. A lot of the layout was based on the prototype I sent them, though I gave some other suggestions along the way. Because of shipping problems and other concerns, it took about a year and a half from the moment I signed the contracts to the point it was for sale.
Regarding the plastic Monkeys and the Security Guard - How important do you think these pieces are to the game? They could have easily been cardboard counters but you chose to make them figures.
Todd - They could have been cardboard, and in some games with a larger number of pieces that can be economically unfeasible to do cool figures, but in this case it worked out.  Plus with this being a game that kids can play, the figures only add to the fun.
Did you play board games as a child? If so, what were some of your favorites back then?
Dan  - Yes, I loved playing board games as a kid. I had all the standard games like Monopoly, Sorry!, Risk, and Aggravation, but I also had a blast playing Ripley's Believe It or Not, Whatchamacallit, Buck Rogers: Battle for the 25th Century, Omega Virus, Fireball Island, and HeroQuest.

Can you tell the readers a little bit about your background and how you got involved in Hobby Games? Are you an avid game player? If so, what are some of your favorites?
Dan - Sure, though I'm not sure where I crossed the line into Hobby Gaming. I remember getting my first Magic: The Gathering card (Norritt, for those interested) from my brother as a promotional item in his comic magazine. I was intrigued the art and the symbols, and wondered what it could all mean. That lead into the world of collectible gaming of Magic, Star Wars, Star Trek, Netrunner, Lord of the Rings, and anything I could get my hands on. Living in Illinois at the time, I naturally went across the border to the huge gaming convention Gen Con in Wisconsin (and then Indiana). During that time I played my share of "modern" board games, but at the time I still didn't realize there was a whole world of euro games out there. When I moved to Austin, I was amazed at the number of board gamers here. Through weekly game nights at my local gaming shop, I discovered so many games and my collection grew quickly.

I play games several nights a week. Some of my favorite board games include Rat Hot, Notre Dame, and Hacienda.

Where do you live?
Dan - I live in Austin, Texas, which is also home to a surprising number of other board game designers such as Ian Cooper (Taktika), Jonathan Leistiko (Island of Dr. Necreaux), Marc Majcher (Honeypot), Justin De Witt (Castle Panic), Andre Monserrat (House of Whack), and Chris Christenson (Hunting Party) just to name a few.

Not to mention Steve Jackson Games. Do you make a living off games?
Dan - No, though someday I hope to modestly supplement my income. Reach for the stars!
What is your profession?
Dan - Ok, I guess games do pay the bills. I am Software Engineer for a casino gaming company. Although they are still games, slot machines are a world apart from board games.

When did you start creating games?
Dan - I remember making board games out of construction paper and bringing them to school in the third grade. I just liked being able to create something that people could interact with. Off and on throughout my life I've been making board games, though for the last five years or so it has been a real passion for me.

What was the inspiration for Monkey Lab and tell us about the developing and playtesting. How long did all that take and did you do it yourself or did that happen after AEG was going to publish the game?
Dan - Strangely enough it started when I decided to take a night class about video game design. In that class, the teacher wanted us to design board games to prototype video game concepts. That was right up my alley! We brainstormed a bunch of ideas and the class decided that we would all design our own games with the topics of "monkey" and "escape". (Monkey Lab was sooo close to being about monkey zombies). After making a prototype and playtesting it with others, I had the urge to continue with the game long after the class had ended. I playtested with a lot of other people and got plenty of positive feedback. It wasn't until that moment that I realized that getting published might be an achievable goal.

I playtested, listened to feedback, researched other games, tweaked, and repeated it all so many times. After about six months I decided to try to submit the game to publishers. During that time I had to be very patient while I waited to hear back from them. Luckily for me I had plenty of other game ideas to work on while I waited.
Do you have any other game designs coming up that you can tell us about, for AEG or for other companies?
Dan - I have several designs that are currently being looked at by publishers. To be brief about it here's my elevator pitch for the three games: Mad Max meets Fairy Tale. Talisman meets Euro. Deep Space 9 meets Jabba's Palace.

What game that you don't work on do you play the most?
Dan - Lately, I've been playing a lot of Go Away Monster! with my son. He loves it!

I would like to thank Dan Manfredini and Todd Rowland for taking time out of their day for this email interview and to AEG for providing the review copy.
Posted by Pete Miller at 5:00 PM