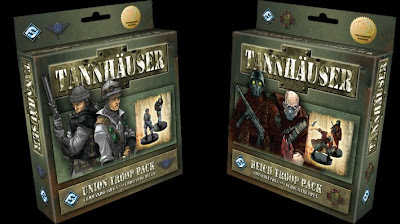 Fantasy Flight Games was quiet for months, but now seems to be moving ahead with the relaunch of Tannhäuser!
From Yesterday's FFG announcement:
"The Reich Troop Pack includes new Schocktruppen and Stossstruppen figures, while the Union Troop Pack comes with new Commando Alpha and Commando Delta figures. Additionally, these expertly detailed pre-painted figures all feature an alternate color scheme, making it easy for players to differentiate these new troops from the ones found in the core game.
These Troop Packs give players new options when constructing their forces, and they provide an all new equipment pack for their Troops! Each pack also features brand new background information, a unique scenario, and all new tokens in addition to the ones found in the core set. With these packs in hand, players will now be able to use the alternate organization of two Heroes and three Troopers. As Troopers are the only characters able to benefit from reinforcement, they are now more important than ever."
The paint  schemes on these new troops looks to be the same as the previously released convention photos last seen here way back in... December 2009.

The Revised Rulebook has been updated in FFG's Upcoming section. It is now listed for May! and "on the truck." They should be in stores in a few weeks!
The Tannhäuser: Union Troop Pack and Tannhäuser: Reich Troop Pack are expected by Summer '10. FFG's Upcoming page shows them at the factory. These packs will retail for $19.95. These packs will be a great addition to the game and are sorely needed.
The Daedalus Map Pack listing indicates it still being "In Design." That puts it very unlikely to meet the long promised Spring '10. The listing was last updated April 2nd.
But when will we get to see these? 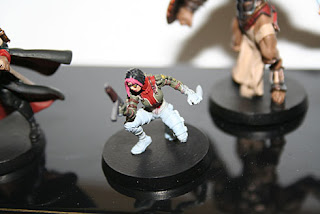 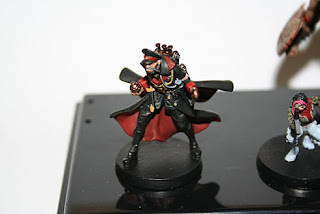 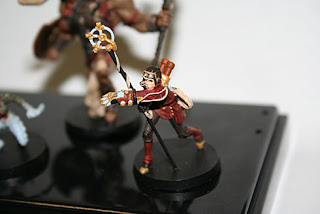 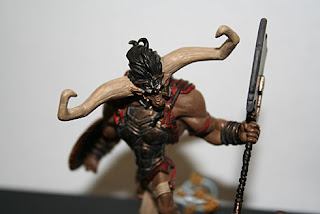 I think I'm beginning to feel U-Chronic!
Posted by Pete Miller at 1:03 PM

I cannot wait to pick up the new rulebook. I've been waiting a long time since picking this up when it was first released, and the new rulebook is the missing piece for me.

These new packs are nice (I love seeing new distribution/release models for games I really dig), but it seems a pack of maps would really add a lot of life to the game overall.

Going by ToYs pattern of dates, this is should be the May 1953 edition of the U-Chronicle ; )