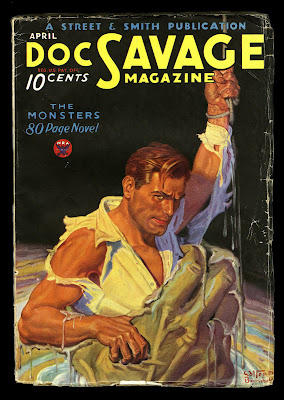 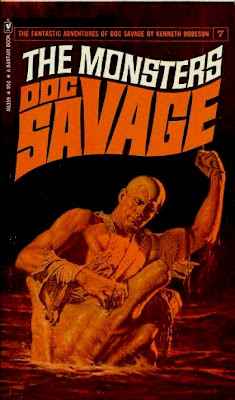 The Monsters is another terrific yarn from the mind of Lester Dent. Eschewing the exotic locales of recent issues, Dent puts Doc right in the heart of America, in Upper Michigan. For those that have seen the Bantam cover it should come to no surprise that the novel involves giants. The cover painting by James Bama is one of my personal favorites. The hand wrapping Doc to crush him. As you can see above, James Bama took a bit of inspiration from Walter Baumhofer.

The ever-prescient Dent (or maybe history is repeating itself in our time) came up with this one: "Doc set up his radio apparatus. Working through a station on Long Island, which transposed his words from the ether to land-line, he got in touch with Renny." Land-line. Nifty.

There aren't a lot of new gadgets here, but the action is good, the story is good, and the writing is good. Dent captures the culture of fur traders well, just as he did with Tibetans or South Americans.

There is the usual bit of insensitive language, this time it's  regarding some traveling circus acts and a fur trapper named Bruno Hen who Dent calls a "breed," probably referring to a mixed race heritage.

The story plays out well with an airplane dogfight, shoot-outs, and huge explosions.

For this review I read my Bantam paperback 4th printing, July 1974. The pulp cover is by Walter Baumhofer and the paperback cover is by James Bama. They are both classic covers.
I give The Monsters an 8 out of 10.
Posted by Pete Miller at 8:28 PM