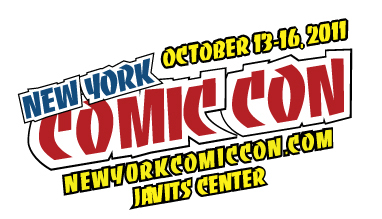 Note - It seems I have misidentified some people in the pictures...
This past weekend I joined the masses at the New York Comic Con. Sunday afternoon was the occasion of the Pulp Fiction - Now With Even More Pulp panel that featured a huge all-star panel that included authors Adam Garcia, Mark Halegua, Jim Beard, and Will Murray, artist Tom Gianni, publishers Greg Goldstein (COO of IDW), Joe Rybrant (Dynamite Comics), and Anthony Tollin (Nostalgia Ventures). Ed Catto was the moderator.
With this many panelists and the volume of pulp material being published, the hour flew by quickly and a bunch of fans got to take home some freebies. The panel was introduced and the current and upcoming projects of the panelists discussed. Disappointingly, there was not nearly enough time for a  discussion on the state of pulp fiction today. I think that there is a lot to be discussed about New Pulp and the term didn't even come up. 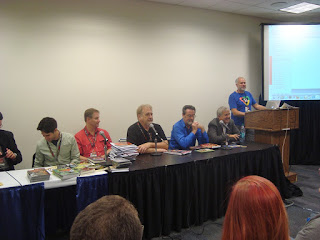 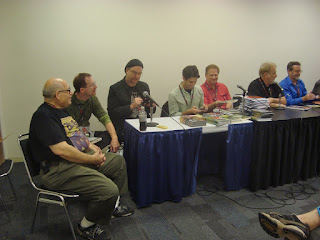 The panel cont. r-l: Joe Rybrant, Jim Beard, Mark Halegua
Some of the upcoming projects mentioned were quite exciting. Here are some highlights, or at least what I remember...
Greg Goldstein said that IDW is doing another anthology series with the Rocketeer, featuring new creators and a few returning creators from the first series. That is great news, because those were good stories. The major publishers can't even get one story in a comic and the Rocketeer Adventures had 3 or 4! I would also like to see a longer adventure featuring Cliff Secord and Betty.
Will Murray wrote the first new official Doc Savage novel released in almost 20 years, The Desert Demons, written from Lester Dent's notes. That came out this summer, but the next one, Horror in Gold is coming out soon! Audio books of Will's first 2 Doc novels are out from Radio Archives. Will is also overseeing a line of of pulp audio books with them as well, starting with The Spider.
Anthony Tollin has many things coming including a Shadow movie serial script and a behind the scenes look at the serial and interviews with crew members. The Shadow Scrapbook will be expanded and reprinted, including a 1934 radio script by Walter Gibson.
Tom Gianni has painted a cover for Moonstone's Avenger Chronicles and is working a Graphic novel of his own called, "Mechanic Anna", which is hoping to have out next summer. Tom's beautiful art, can be seen here.
Adam Garcia is making a name for himself with his new Green Lama stories which span the media. His new Green Lama novel, The Crimson Circle should be out early next year, and there will be Green Lama comics and an audio drama, too. Exciting stuff!
Dynamite has a lot going on and Joe Rybrant clearly loves pulp and talked about an upcoming Flash Gordon / Phantom cross over featuring another unnamed pulp character that may be Mandrake of possibly the Green Lama... Dynamite also has another big pulp character coming that will be announced soon.
Mark Halegua has his first story out in Mystery Men & Women Vol 2 from Airship 27. It features his original character, the Red Badge.
With this many creators and this many new books to talk about there wasn't much talk about the future of pulp, or the New Pulp movement, except for when Adam Garcia talked about bringing more to the table by leaning in a slightly more literary / post-modern vein that some pulp fans don't seem to care for. I think that there is plenty of room for that and the mainstream publishers are publishing that under the guise of 'steampunk' and other names... 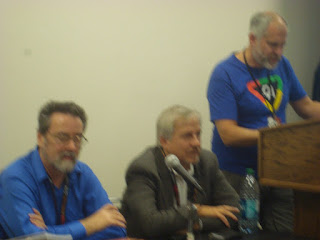 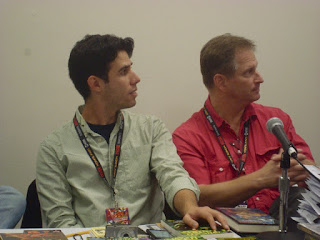 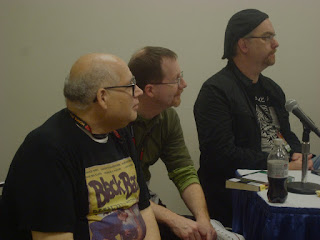 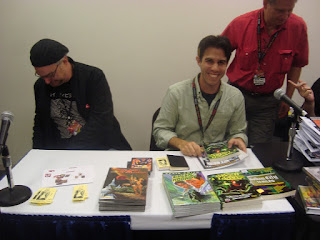