Pulp of the Week - Storm Front 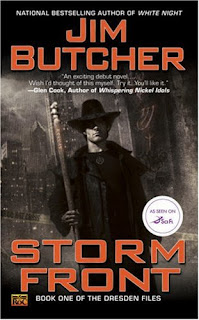 
Storm Front is the first book in Jim Butcher's series, The Dresden Files. The stories feature Harry Dresden, a freelance wizard and part-time private detective in contemporary Chicago — well, a version of contemporary Chicago that includes all sorts of wizards and demons and bizarre activities.

Storm Front was released in April 2000. It is one of the books that helped push Urban Fantasy into the forefront of genre literature and is one of the few series popular with men. Other Urban Fantasy authors are Laurell K. Hamilton, Kim Harrison, and Charlaine Harris whose Sookie Stackhouse book series started in 2001. 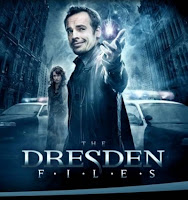 The series has thus far spawned a sci fi channel show, comic books, and a role-playing game. not bad...

The novel follows Harry Dresden through the course of two mysteries. One is a missing persons case where a desperate woman asks Harry to locate her missing husband and the other is a brutal mob hit that has supernatural written all over it. Harry consults with the Chicago PD on those kinds of cases.

Harry's ad in the phone book - you know this was written a long time ago - well before the iPhone, anyway - because he has an ad in the phone book:
HARRY DRESDEN—WIZARD
Lost Items Found. Paranormal Investigations.
Consulting. Advice. Reasonable Rates.
No Love Potions, Endless Purses, Parties,
or Other Entertainment

.
While the plot of the book is certainly good enough, and the mystery well conceived, what really make the book work, like so many other private detective novels is the voice. In this case, Harry's voice.

The book is told first person, with Harry's battle weary voice guiding us through the events of the novel. The book is very entertaining and Harry really grows on you. I enjoyed the book a lot, despite numerous recommendations which could have easily caused me to be expecting too much. 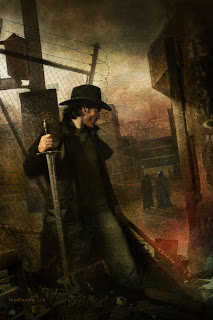 Maybe my guard was down from having seen a couple of episodes of the ehh Sci Fi channel show based on the books, but I really liked the book.

I'll give Storm Front a solid 8.5. It was a fast read and an exciting tale. For this review I read my ROC paperback, 22nd printing with an "As seen on SciFi" announcement of the cover. The cover is a nice painting of Harry, but the book does not tell me who the artist is... but the internet says, Christian McGrath.  Jim Butcher can be found here.

Yay, Doc! I'm actively going through this series at the moment =) It's great fun.

Thanks for catching the mistake Whitney!