Pulp of the Week - Uchronic Tales: The Horn 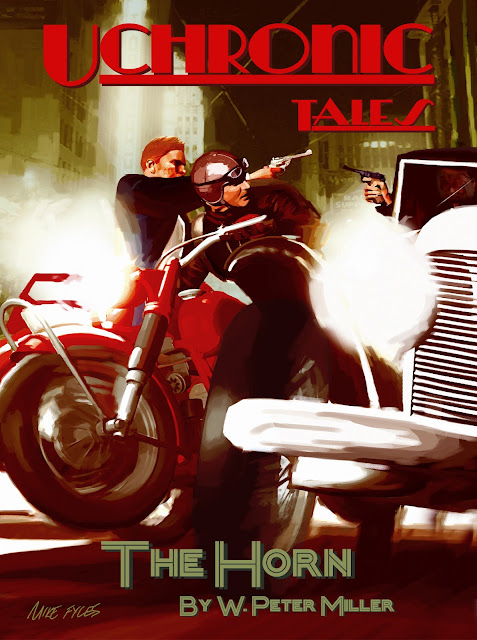 Uchronic Tales: The Horn should be available for Kindle and Nook by Monday Night at the special introductory price of 99 cents! The introductory pricing on The Zeppelin will end on Friday, March 23rd, so pick up both titles while they're cheap!

The Uchronic Press is proud to announce “Uchronic Tales: The Horn,” our second release. This thrilling 17,000 word novella by W. Peter Miller has a stunning cover by the talented Mike Fyles (Amazing Spider-Man and Iron Man Noir covers) and features the Ace Insurance investigator Clark Tyler, a man that trouble seems to find. Or perhaps he is just good at finding it. This story is available now on Kindle, with Nook and all other formats to follow.

The Uchronic Press is here to serve all readers that crave action, excitement, and a bit of an edge in their pulp adventure fiction. Our stories take place in an alternate past, a Uchronic world greatly like our own, but with a dash more mystery, danger, and the macabre. Here you will find heroic adventures, outlandish science, ferocious alchemy, mystic forces, and an alternate history just slightly larger than our own.

Uchronic Tales: The Horn follows Clark Tyler, an investigator for the Ace Insurance Company, as a simple job spirals toward an Earth-shattering conclusion all set against the backdrop of the 1932 Olympics in Los Angeles.

What is the Horn and why do some distinctively nasty visitors want to get their hands on it? What would happen if someone decides to give it a blow? Clark is there to stop that from happening. Clark is joined in “The Horn“ by a daring aviatrix, a charming archaeologist, and a strange mercenary from Clark’s past.

Join us for the mysteries, the thrills, and the startling conclusion of…
The Horn.

The Tannhauser customs fans out there may recognize the guy riding the motorcycle on the cover - that is none other than... The Jackal! He is also briefly in The Zeppelin, but he has a much bigger role to play here, along with his two pets!

In the months ahead, danger will put Clark in middle of many Uchronic Tales. Look for stories featuring the classic days of Hollywood, earth-shattering danger, lost civilizations, and bizarre visitors from the unknown aether.