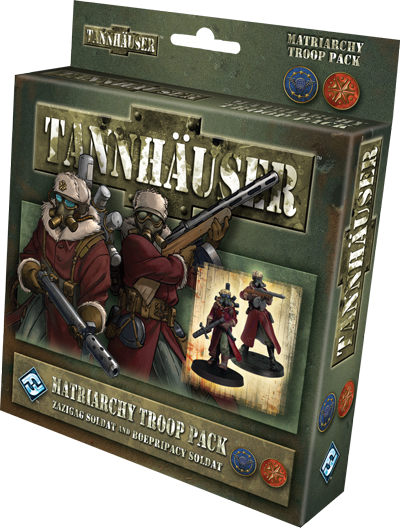 From the Press Release:

"Punish the enemies of the Matriarchy in a hail of bullets and a storm of fire with the Matriarchy Troop Pack for Tannhäuser. This expansion gives you access to the Boepripacy Soldat and the Zazigag Soldat, and these new troopers open a whole wealth of strategies for the Matriarchy. With a large boost in available firepower, the forces of the motherland grow even stronger."

"Only the most faithful soldiers of the Matriarchy are promoted to Boepripacy Soldati. Tasked with the vital mission of carrying extra ammunition into battle, these troopers use their Supplier ability to give their allies Extra Ammunition tokens. This allows the recipient of the token to make an additional attack. Furthermore, this trooper wields the deadly PPSH-42 Double Drum Carbine, a gun that throws out an overwhelming amount of shots.

"Well known for their bravery in battle, the Zazigag Soldat uses the Gnev Bogov Ognemet to bathe enemies in deadly flames. While this flamethrower has a short range, it is capable of burning multiple targets. Since these troopers are often exposed to the flames of their own weapons, they wear flameproof armor that keeps them safe. This allows the Zazigag Soldati to spread their flames and defend the motherland without remorse.

Increase your firepower with the Matriarchy Troop Pack, an expansion for Tannhäuser. These troopers allow you to field a Matriarchy force without Voïvodes for the first time, and now you’ll be able to employ new strategies to secure victory. Pick up your troopers at your local retailer or order them from our webstore."

In other news, newer players, especially Von Heizinger fans, should enjoy the re-release of Yula, a terrific addition to the Reich forces.