Since my last Fight Klub post there has been a little official news...

1) We learned a little about the Fight card stack.

Tim , the game designer said, "In most cases, Fight cards have a set of 3 skirmish numbers across the top of the card. Those numbers are compared against the skirmish numbers on the opponent’s Fight card, and whoever wins the most skirmishes wins that fight and scores their Fight card. There are many ways to enhance these numbers and there are many deck building strategies in constructing your Fight stack depending on the Hero or Villain you have chosen for your deck. This is important because Fight cards cause damage to the opponent, reducing the opponent’s Life. When you reduce your opponent’s Life to zero, you win the game. (And we do have a way to count damage in the game without dice or keeping score on paper.)

"So, while there are many ways to manipulate the skirmish numbers on your Fight card to give you better fighting ability, what I want to talk about today is two types of Fight cards. We call them “global” Fight cards and “Signature” Fight cards. There’s a big difference between the two types. Global Fight cards can be used by any character (although only Heroes can use Hero Fight cards and only Villains can use Villain Fight cards). Which cards you choose to use will depend on which Hero or Villain you select and your deck strategy. Fight cards have a variety of choices in the mix of skirmish numbers, in which of the three slots the different skirmish types are located, and what type of bonuses they can provide. All of these come into play when selecting the Fight cards for your Fight stack. Obviously, with a large pool of Heroes and Villains there are many options in terms of how individual Heroes or Villains fight.

"For example, a Hero strong in Spirit Energy might want to use different kinds of Fight cards than, say, a Hero strong in Physical Energy. Specific Heroes and Villains tend to fight with characteristics that match their identity. Thus, for them to fight effectively, the player has to build a deck that maximizes the characters unique “character.” As such, there are natural strategies for building decks around a character’s skill and the type(s) of Energy they generate in the game.

"Signature Fight cards, however, are limited to one specific character. Only the Hero or Villain whose icon appears on the Fight card can use it. Each character gets a Signature Fight card. You don’t “have” to use your Hero’s or Villain’s signature card, but you will probably want to. Signature Fight cards give extra bonuses and usually provide twice the damage of a global Fight card. And in keeping with the player-friendly goals in Fight Klub, these strong Fight cards are not rare, they are uncommon, which means you can use up to 3 of them in your Fight stack (and you should get three copies for each of your Heroes and Villains with the purchase of a playset)."

So we know that we'll have a character and play card in a 'fight stack' and play cards that affect the stack. It would be great to see some of these cards, but I'm sure that will come.


2) We also learned some cards will contain an icon (a circle in a circle) that represents the word 'opponent'. This is to reduce the amount of space on the card that word occupies...

They gave the example:

So now we know more about the types of energy and that there are things called conditions.

3) The Deadline to apply to be a Founding Member has been extended. I don't know if that is due to Decipher's server having a massive failure over the weekend or if it is because they have only half as many applicants as available spots. You now have until Monday, May 5th to apply.

Later, when you want to buy cards for the first time... 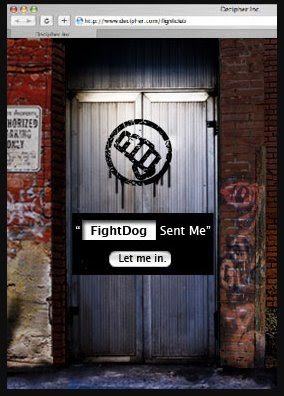 Two of the hotly discussed issues on the forums are what characters should go into the game and the naming of the clans. Everyone has an opinion on this. My feeling is that since the game targets people with credit cards or ebay accounts, they are targeting an audience that is above driving age and approaching drinking age.

I am sure that the character selection will include lots of R-Rated properties. Many of the most popular characters discussed fall into this category. Terminator, Aliens, Evil Dead, Predator, Dirty Harry, Blade Runner, Nightmare on Elm Street, Rambo, and Robocop are all popular choices. According to a Decipher rep, "The Fight Klub TCG is taking its Heroes and Villains from Movies and TV shows from the libraries of major Hollywood studios."

Since Set One and Two are released simultaneously, we will get 16 characters right from the start. The website currently lists 38 possible characters. These starting characters will have to be awesome to drive interest in the game.

Who do I want to see?

The second much discussed issues is the names for the Clans. The Founding Mentors will be deciding on the names for the 13 Clans that the players will be able to choose from when signing up to play the game. Decipher calls these 'Gangs', but a vocal group feels that calling the packs of cards 'Kilos' and the groups of players 'Gangs' is not a good idea. I am with that group. I like 'Clans' and 'Bloks'.

My favorite Clan names on the boards so far are:

- Spike on the Fight Klub boards -

Fight Klub and all related images are trademarks of Decipher, Inc. All Rights Reserved.
Posted by Pete Miller at 4:24 PM