Lady Fürstenstein is a direct descendent of Frederick Fürstenstein, legendary discoverer of the strange black rock that sputtered and glowed and gave sparks and light. Książ Castle was built in 1020 to protect the tunnels where the mysterious black rocks were dug. The discovery of those rocks - coal - made the Fürstenstein family rich, even to this day. 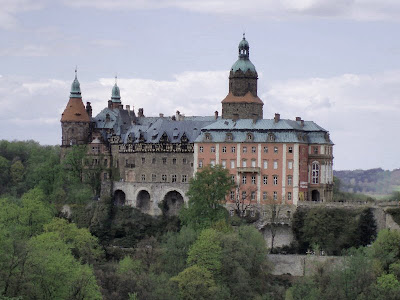 As a young woman she had years of training in the Eastern Dynasties. Lady Fürstenstein can perform all manner of Martial Art moves and attacks. 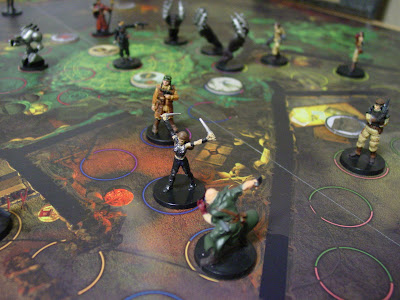 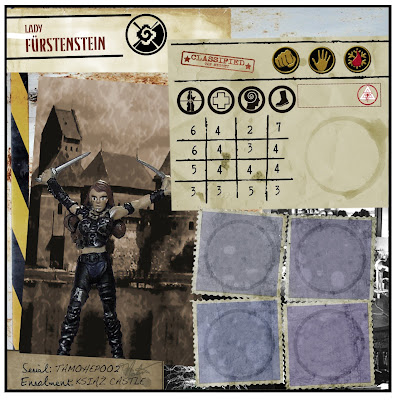 Shaolin Training - If there is an oponnent's figure adjacent to Lady Fürstenstein, instead of taking her normal move, she may move to any unoccupied circle adjacent to that figure. During a Combat Roll, Shaolin Training adds a 1-point bonus to the result of each die (except for Natural 1s) when making a Hand to Hand attack. This is in addition to any other Hand to Hand bonuses.

Smoke Powder - Lady Fürstenstein can throw smoke powder in any unoccupied adjacent circle. Place a smoke token on that circle. The smoke fills all paths that share a color with that circle.

Flying Blades - Lady Fürstenstein can attack a figure at a range of 4 , but you must discard this token, and place the Twin Daggers token on the circle with the target.

Lover's Rage - If Doktor Moeller is attacked in the same Pathfinding as Lady Fürstenstein, and she has not had her Sequence, she can go right now, interrupting the attackers turn. She receives 2 extra attack dice if she attacks Moeller's attacker.

Martial Arts - Lady Fürstenstein adds 1 to each die when making a Hand to Hand attack. This is in addition to any other Hand to Hand bonuses.

Flash Powder - During her Sequence, instead of taking an Action Phase, Lady Fürstenstein may discard this token. All adjacent figures may not play their Sequences this game turn.


The figures used so far for the Moeller's Hermetics faction are:

My custom additions to Tannhäuser are not created by, distributed, or endorsed by Take on You, Asmodee, or Fantasy Flight. Tannhäuser and all related characters are trademarks of Take on You and © Take on You LTD. All Rights Reserved.
Posted by Pete Miller at 3:09 PM