The Tale of Bodvär the Bold began when I saw the figure - Aspect of Moradin - previewed on the D&D site as part of the Wardrums minis set. I thought the figure was awesome and ordered Bodvär along with several other figures. 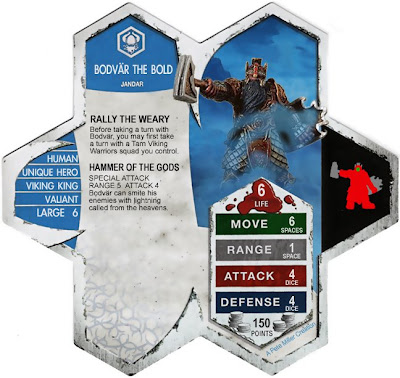 I cut Bodvär off his D&D base and put him on a custom Heroscape base. That base was made from the original traveling mold set by Matt Drake, who was kind enough to ship me a massive envelope of the things. Please visit Matt's awesome game review blog - Drake's Flames - http://www.drakesflames.blogspot.com/

I quickly made his card and posted him up on my Heroscapers customs thread. He went over really well. After just a couple of tweaks, Bodvär was done and became my first custom to enter the Halls of Valhalla. It was around that time that I created the first part of Bodvär's epic tale.

Later, while working on the Codex article for adding Artifacts to Heroscape I decided to create the end of Bodvär's time in Valhalla. I plan to finish the tale eventually. For now, here are the two parts. These are edited and modified from the originals. Further changes are likely.


The Savage Tale of Bodvär the Bold

The young Tarn warrior, Hjalti, burst into the darkened chamber. “Bodvär, the beasts have returned!” he cried. The scarred and weary King of Tarn stirred, then hearing the distant cries of battle, sat bolt upright. The young warrior assisted Bodvär the Bold in donning his massive battle armor. The King was a giant among men, eight feet tall and wider than most doorframes.

The King, clad in brass and steel, kneeled before a small shrine to his ancestors. “May Wodin protect us,” he whispered. Hjalti slid the King’s Shield on his arm. Bodvär reached onto an oaken rack for the war hammer that was the symbol of power in Tarn. The ancient weapon was handed down through the generations of his family. The hammer called Bjärkamal; but better known as The Hammer of the Gods. They did not know it would be the last time the hammer rested in Tarn. Bodvär and the young warrior rushed out of the bed-chamber and into chaos.

The Throne room was on fire. The yule trappings burned with a rage only half that of the King. Monstrous creatures, part beast, part bear, were tearing his Viking Warriors to pieces. The King rallied them, and for a time they held their ground. The Hammer of God spoke many times that day and each time the answer was death. Then the very walls turned on them, collapsing from the weight of the army of invading creatures.

As the hewn beams and quarried stone fell, Jandar intervened and at that moment pulled Bodvär to Valhalla to join his champions in the unending war against Utgar. 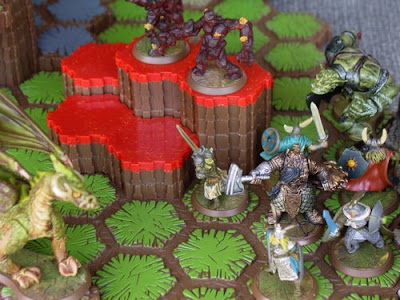 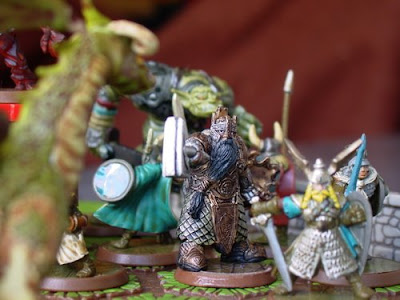 The battle was not going well. The massed forces of Utgar had pursued Bodvär the Bold for weeks, pushing the former King and his band of men into the Mountains of Stechavan. Thorgrim had fallen two days prior and Finn could barely stand. They staggered into the pass of Jagged Teeth, the canyon walls sheer and unclimbable. With War Beasts, Mammoths, Rhinos, and Terrible Lizards pursuing, they pushed their way into the ever narrowing canyon.

"How much farther?" barked Bodvär.

Their guide, a Kyrie named Sheralaer did not know. "One hour at the most," he said.

Ever since Bodvär had discovered the location of a powerful artifact, Utgar had sent more and more of his army after his troops. The Viking King knew that if Utgar discovered the hidden location of the fabled Altar of Living Pain the war was as good as over. He had to get news to Jandar. The Altar had to be destroyed.

The ragged army had been marching through the Jagged Teeth for fully an hour when the drumming began. From high up the sheer walls BOOM BOOM BOOM BOOM sounded over and over, an unrelenting sonic assault. The Kyrie scout flew up, returning in such a panic he could not speak. The winged hero looked up in fear.

Fully four thousand filthy blue-grey archers stepped forward, lining the canyon walls. Bodvär urged his troops ever faster, rushing to reach a small crevice he could see in the rocks ahead. Above, the order boomed from the heavens and the archers fired. The sky went black and Bodvär cried out, "Onward! Sanctuary!" But his men never reached the small stone cavern. The black wall of arrows rained upon his men. The sound of it was a massive shredding of armor and flesh. Leather and bone.

Bodvär alone made it into the small cavern. Seventeen arrows pierced his body. In the unnatural quiet following the sky-smashing volume of four thousand arrows raining down, Bodvär realized he was not dead yet. He extracted arrow after arrow, pulling out stone and iron points, Bodvär sat on a rock in a cave that was larger than he realized. The entryway was narrow, but the Viking King could see a glow lighting the cavern ahead. He wearily hefted Bjärkamal,The Hammer of the Gods, and stepped around a bend into a softly glowing chamber.

The blue light came from a small pool of water no more than 6 feet across. The water inside was crystal clear and blue and inviting all at the same time. Bjärkamal slipped from his fingers as Bodvär kneeled by the Pool of Destiny to wash his wounds.

The moment the waters splashed across his face, he felt his strength returning; the gashes and punctures closed before his very eyes. "By the Gods," was all he could say before he was consumed by the blue glow of the Wellspring and was gone.

Bodvär the Bold was knee-deep in snow, looking down the mountain at the smashed ruins of his ancestral castle, and for the first time in his life, he wept. He was home.

My custom additions to Heroscape are not created by, distributed, or endorsed by Hasbro. HEROSCAPE and all related characters are trademarks of Hasbro. © 2006 Hasbro. All Rights Reserved.
Posted by Pete Miller at 10:33 PM