Tannhäuser Tuesday - The BIGGEST EVER!!!

U-Chronic Token of the Month

June's token will surely thrill you. Mark your calendars. Littlewars will be supplying most of the tokens for that feature. Littlewars will also be delivering scenario translations and other awesome Tannhäuser custom material.

The Right Hand of Doom
Last year, when I started reading about Tannhäuser, I knew I would have to get Hellboy into the U-Chronic world. There is a lot of common ground between Tannhäuser and Mike Mignola's amazing comic books and I can't imagine a more natural fit. 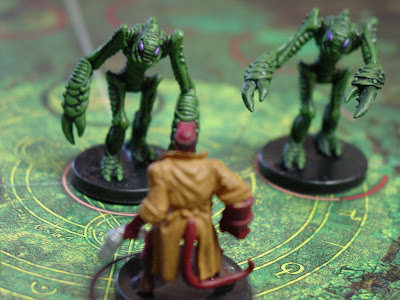 I have some experience adapting the B.P.R.D. into game terms already. See my article in Issue #7 of The Codex for Heroscape versions of the characters. 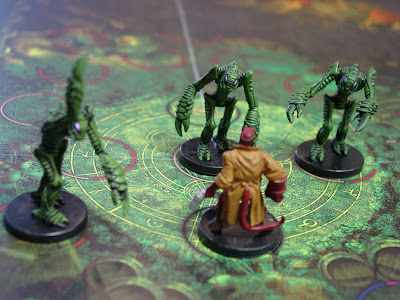 Team Savage Tales plans to create a complete B.P.R.D. faction. Because of the sheer power of Hellboy, the B.P.R.D. will only be able to field 3 figures when Hellboy is on the team. But that will be enough, because he is mighty. Without Hellboy, the B.P.R.D. can field the usual team of 5 figures. The B.P.R.D. is on the side of the Union, but they may not intermingle when creating an army. 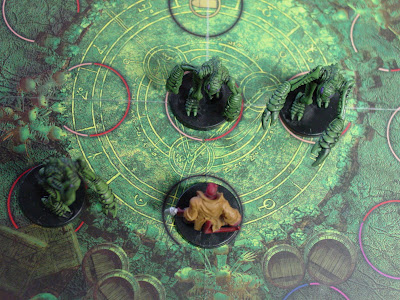 When complete, the B.P.R.D. will be able to select their team from the following characters:
Hellboy
Abe Sapien
Lobster Johnson
Roger the Homunculus
Trevor Bruttenholm - (if an appropriate figure can be located from the sea of prepainted clix)
B.P.R.D. Agent 1
B.P.R.D. Agent 2

Additionally, the Matriarchy will be able to enlist the services of Grigori Rasputin.

Anyone interested in fielding a B.P.R.D. team should plan on buying the Heroclix B.P.R.D. box set that contains Hellboy, Hellboy as a child, Abe Sapien, Liz Sherman, Roger the Homunculus, Johan Kraus, and Ben Daimio. Two other Hellboy figures and the Rasputin figure are available at Everything Mage Knight and many other on-line retailers as single figures for purchase from the Indy Heroclix expansion. That is also where you can find the Lobster Johnson figure. The crab-like nasties pictured here are re-based Dreamblade Hive Pincer figures - this is a dead collectable game so the figures are cheap (.69 at Everything Mage Knight).

Liz Sherman, Ben Daimio, and Johan Kraus are not being included at this time because they don't fit easily into the U-Chronic timeline. A scenario featuring Trevor Bruttenholm and the young Hellboy could be created and might be a lot of fun. That scamp can get in a hell of a lot of trouble. If any of you Clix fans know of a good figure for Bruttenholm we'd love to hear it.

The Tannhäuser B.P.R.D. project will take a long time to complete so bear with us as we see the project through (I am also working on finishing the Moeller's Hermetics faction. If anyone has thoughts for addition characters from the Hellboy universe to include, please let us know. We would also like to hear any comments on any of the works presented. 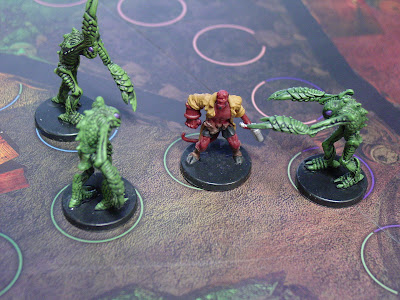 This week's special feature is a sneak peak at a work in progress. Littlewars and Doc Savage present the first draft of Hellboy... 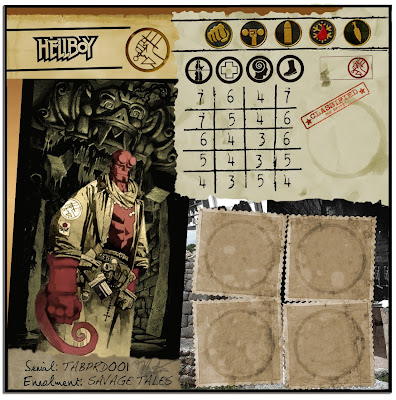 My custom additions to Tannhäuser are not created by, distributed, or endorsed by Take on You, Asmodee, or Fantasy Flight. Tannhäuser and all related characters are trademarks of Take on You and © Take on You LTD. All Rights Reserved.
Posted by Pete Miller at 9:50 PM