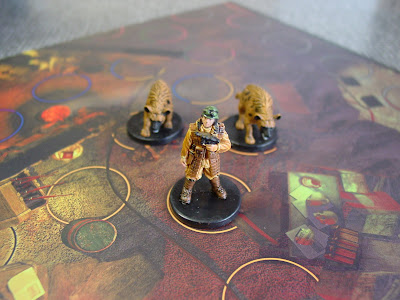 In 1948, Matthäus Lang found himself in Africa searching for the staff of Ra, a valuable artifact he overheard some archaeologists discussing. His search took him to the southern reaches of the Sahara Desert. It was here that he found something that has served him better that some ancient trinket. In the scrubby brush barely surviving at the edge of an oasis he found two tiny pups. He thought they were dogs and took pity on them. He fed them. They followed him back to his camp and into his future. As the pups grew older, he learned they were hyenas, but by then he was too attached and they became his traveling companions.

In early 1949, in the jungles of Southeast Asia, the animals saved his life yet again. They held off Clark Savage, Jr and his men long enough for the Jackal to escape.

His whereabouts are currently unknown. 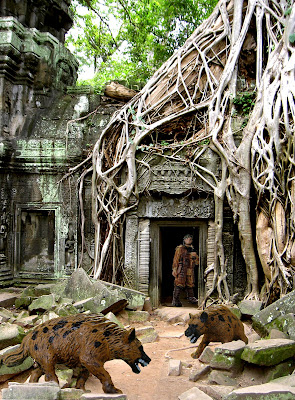 I thought that the Hunting Hyena - a Common D&D Miniatures figure from the War of the Dragon Queen set - would make a great companion for my custom mercenary, Jackal.

You can see Jackal here.

If playing with the hyenas, Jackal gets an additional pair of tokens. These represent his trained companions.

Jackal can replace an equipment token with a hyena token. Each token used would get him one hyena, up to a maximum of two. The hyenas have their own board and are a one wound-to-kill animal that you can't use first aid on. They are limited to attacking figures that are adjacent to them on the same path as Jackal.

They would have the Close Combat skill but may not use any weapons.

The hyenas may choose 2 tokens from a pool of 4.
Relentless - If attacking a wounded character the hyena gets a +1 to its Combat.

Follow the Scent - The hyena may move and attack on any path adjacent to Jackal's path.

Bloodthirsty - If the hyena kills a character it must attack an adjacent figure if there is one. The hyena will not attack Jackal, but will attack friendly characters. If there is more than one adjacent figure, the hyena's controller chooses which adjacent character to attack.

Hunter - The hyenas may move through enemy figures without penalty. 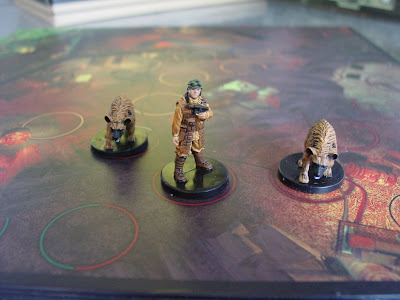 Questions for the Tannhäuser fans -

How many hyenas do you think that Jackal should be able to get? Is two the right number?

Is the loss of a weapon slot too harsh a penalty, or is that a good trade off for an additional figure (the hyena)? Or should getting the hyena cost more?

My custom additions to Tannhäuser are not created by, distributed, or endorsed by Take on You, Asmodee, or Fantasy Flight. Tannhäuser and all related characters are trademarks of Take on You and © Take on You LTD. All Rights Reserved.
Posted by Pete Miller at 11:48 PM