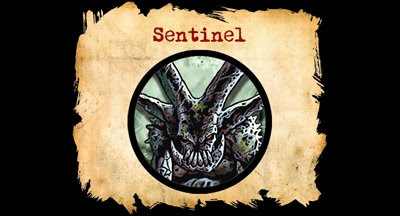 This month's U-Chronic Token of the Month is the Sentinel, an animated statue that acts as a guard for the Reich forces. The Sentinel, an unofficial token, is based on the Gargouille token designed by Chayaro and posted in the French section of the Black Sheep Archives site.

Originally I was going to do a straight translation of the token but I couldn't help but streamline the rather lengthy rules. I did try to maintain the spirit of the original token as much as I could and I'd like to thank Grubert for his translation help, as well as his critique and observations. 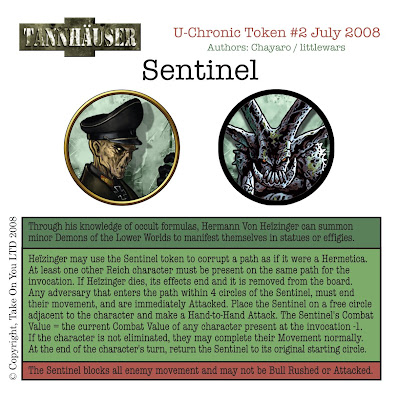 The Sentinel follows all the Hermetica rules on page 22 of the FFG rule book. At least one other Reich character must be present on the path to use the token and invoke the Sentinel. Ideally you should use characters with high Combat Values, as the Sentinel's Combat Value is based on the current Combat Value of any characters present at it's invocation. 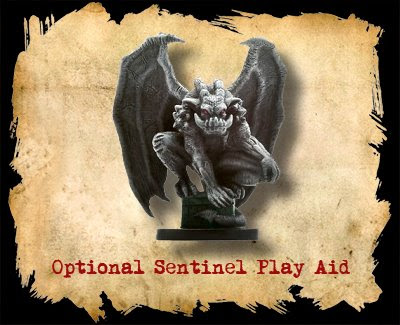 The Sentinel token is used like a Hermetica. It is placed on a free circle but it will move to Attack characters that enter its path. In order to track the starting circle, and its current location, you may use an optional miniature. I recommend the D&D mini Earth Element Gargoyle, an uncommon from the Blood War set. The token would stay on the original circle and you would move the mini to indicate the Sentinel's current location. You don't have to use the miniature as long as you note the token's original starting position.

It is important to indicate the Sentinel's current position at all times, as it can only move back to its original circle at the end of the character's Sequence. There may be situations where you "bait" the Sentinel towards you in order to run around it, as the Sentinel may not be Bull Rushed. This could be especially crucial in scenarios were you need to exit the map and the Sentinel blocks your escape route!

Last month, I talked about using a circular craft punch to make your Tannhauser tokens. One thing that I've found problematic with this method is you need to be very precise when you are punching out the tokens or you are left with white edges around your token. My fix was to modify the token graphics and expand the border so there would be a "bleed" around the token much like the ones you punch out in the boxed game. As a bonus this month I'm posting all the official tokens currently available on the Fantasy Flight Games website with full bleed: 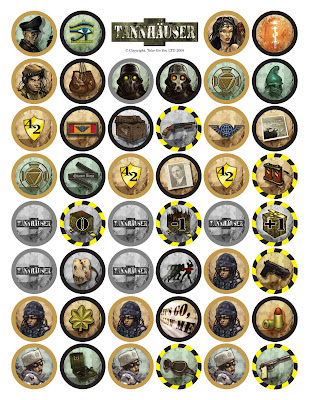 That's it for this month, any comments or questions are appreciated.

Join me and Doc Savage next week for a special Tannhauser Tuesday! 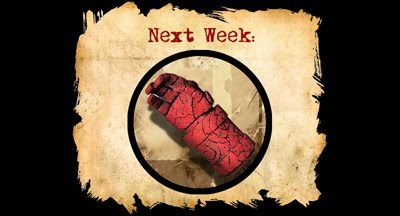 These custom additions to Tannhäuser are not created by, distributed, or endorsed by Take on You, Asmodee, or Fantasy Flight. Tannhäuser and all related characters are TM and © Take on You LTD. All Rights Reserved.
Posted by Pete Miller at 12:58 PM