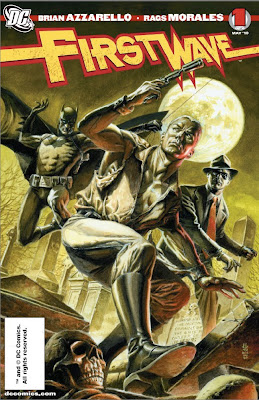 The first issue of six in the First Wave limited series which takes place in the so-called First Wave Universe is a $3.99 comic that has 30 pages of story and was released last week.

The story begins with Johnny in trouble in South America and Doc Savage returning to New York from Gotham City (see Batman/Doc Savage Special for details.) for Clark Savage Sr.'s  funeral. This is somehow tied in with John Sunlight, the Spirit, and the Blackhawks.

Normally, I wait for the trade paperback for miniseries, but for Doc Savage I made an exception. Upon reading issue 1, I am reminded why I don't buy single issues any more. So very little happens in an issue of a comic book any more. They are more like story boards for a movie than ever before. Comics from my youth, circa 1972, almost always contained a full story. They might continue, but rarely did not finish a story. This comic is a beginning of a graphic novel, no more. It is just 16% of a story that we are buying on time.

The art is OK, but we were kind of spoiled with Phil Noto's soft deco work in the Batman/Doc Savage Special. Rags Morales' art is OK, but the colorist isn't helping. For my taste there is excessive over use of photoshop highlights in the coloring. It puts a much more contemporary look in the book than it needs and everything kind of looks the same. Hopefully the color palate will improve and we will get to see the art a bit simpler.

There is plenty of good stuff in here. Renny is nicely cast as Doc's main confidant and Monk and Ham banter, but it isn't too silly. The scenes of Johnny in the jungle are good and have the best art. Johnny gets a big part in this issue and more pages than anyone else. He is in South America running away from something and searching for something else. All he finds is trouble. And Rima, the Jungle Girl.

But Long Tom doesn't have more than a line or two. Even in the pulps, he is the least heard from.

What are the big changes to Doc Savage? He has a cel phone. He uses computers. He is world famous and stalked by paparazzi. His father was even more famous. We get into his head a little, which the pulps never did.

What things are the same? As in "The Man of Bronze" (the first Doc Savage Pulp) Doc's father has been murdered before the story starts. Doc was away at the Fortress of Solitude.

I don't feel the changes made destroy the legacy of the Doc Savage pulps. Those are in the process of being printed for the third time. I don't think any other pulp can boast that. If you like your Doc Savage pure, stick with the beautiful reprints or the upcoming Will Murray pulp-style novel.

To me, Doc still feels like Doc. Maybe I am a bit more open to interpretations and adaptations than other fans, but I am fine with giving this new incarnation a chance and my money. And John Sunlight is the villain. The First Wave Universe shows promise, but we barely get a peek into it, this is just a tiny bite of story.

I cannot speak to the interpretation of the Spirit as I am unfamiliar with this character, but he is a bit of a wise-cracker and gets in a fight.

All in all, I give issue 1 of First Wave a 6 out of 10. Hopefully the series will improve, but at this point I would recommend just waiting for the trade paperback.
Posted by Pete Miller at 12:45 AM

Ryan Hatt has left a new comment but it seems to have vanished.

He said, "But there's already been a Batman/The Shadow crossover comic before in the mid 1970s so what's stopping them this time around? Anyway, the Batman, though partially a rip-off of the Shadow, is closer to the Black Bat seeing that there was a huge lawsuit in the thirties over copyright. Anyway, they've done it before so why not again?"