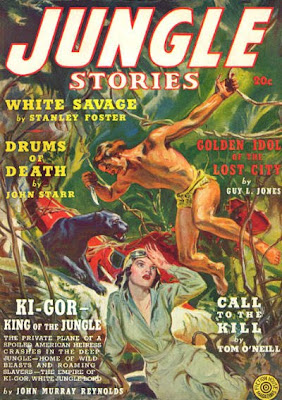 I have recently read four of the adventures of Ki-Gor, the white African jungle savage character presented in the pages of Jungle Stories Magazine from 1938 until 1954. I first read a 2 in 1 reprint from John Gunnison's Adventure reprint mag (actually the 39th and 40th Ki-Gor stories), and then read the first two issues as presented by Pulpville Press available in one reprint volume from their Lulu store. The 4 stories I read were all written by John Murray Reynolds, but after the first issue the publisher began using the house name John Peter Drummond.

The first two stories introduce Ki-Gor, the son of a missionary, who survived the Wunguba tribe attack that killed his father when he was a young boy and learned to survive in the wilds of the Congo with the help of his friend, Marmo, the elephant.
The first issue of Jungle Stories published at the end of 1938 contained the first story, Ki-Gor -- King of the Jungle, about an American aviatrix, Helene Vaughn, who is flying solo across the African Continent. Unfortunately, she has engine trouble and crashes her plane in the jungle. Ki-Gor rescues her and they slowly grow to trust one another. Despite not speaking English for 20 years, Ki-Gor remembers it quickly. After escaping from slavers (a recurring theme in this series) they grow closer. 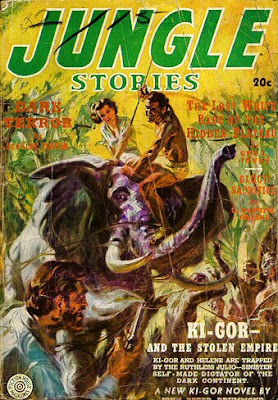 The second novel, Ki-Gor and the Stolen Empire, follows the couple's growing relationship as they escape from slavers and discover the remains of a hidden ancient Egyptian City and the last of the line of survivors from ancient times. The lost city of Memphre has survived with the help of pygmies and an army of trained chimps.
In the nearly ten years of Jungle Stories that passed between issue 2 and issue 39 many things changed for Ki-Gor and Helene. They got married. Ki-Gor gained a best friend and blood brother named Tembu George, leader of the Masai people.
N'Geeso, the leader of the the pygmy tribe is also a very good friend of Ki-Gor and Helene and often keeps an eye on Helene. Tembu George and N'Geeso remind me of Monk and Ham from the Doc Savage novels, always bickering, but the best of friends. 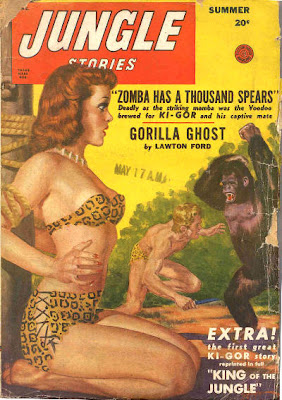 The Ki-Gor story In the Summer 1948 issue of Jungle Stories happens to have two titles, one on the cover and one inside the magazine. Somehow Cromba Has a Thousand Spears became Zomba on the cover. There is no Zomba or Cromba in the story, anyway. There is, however, a former ship's captain that has gone insane and is seeking revenge. He attacks with an army of huge savage dogs.

The story opens with Ki-Gor finding a nude woman swimming in the pool near where he lives with Helene. She comes on pretty strong and Ki-Gor manages to extract himself from her charms. This scene demonstrates that at times the later Ki-Gor stories can edge toward the spicy side of the pulps. They are tame by today's literary standards, but compared to Doc Savage or the Green Lama, these jungle tales are sexed up a bit. 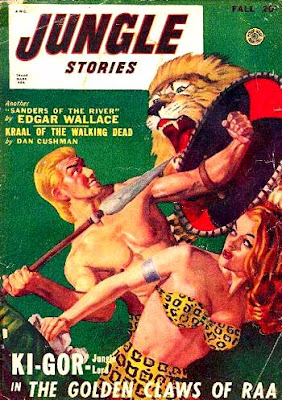 The next issue, Fall 1948 contained the story, The Golden Claws of Raa. This tale again returns to the slave theme with much excitement over capturing Helene and Ki-Gor. There is also a band of terrifying great apes that are vicious killers.
I would have to say that I enjoyed the first two novels the most, followed by The Golden Claws of Raa. All of these tales are full of captures and harrowing escapes, cruel villains and good friends.
The African characters are generally referred to by their name, their tribe, or for unnamed characters, as 'the black.' Ki-Gor is often called 'The White Lord of the Jungle.' That is certainly condescending, that the white intruder should rise up to be the hero and protector of the jungle, while the black natives depend on him. But, while Ki-Gor is the hero, I have to say that his friends are treated with respect and equality, something that didn't always happen in the 1940s. N'Geeso and Bantu George are fully fleshed out characters, not stereotypes.
As you can see, the covers tend to feature Helene as her image surely attracted the target demographic. Additionally, the editors have apparently instructed the artists to be sure she is in danger, or better yet in a bondage scenario.
Since I want to know how Ki-Gor met his friends and when and how Ki-Gor and Helene get married I know that these are pretty good stories with good characters. I want to know what happens to them. The stories seem to be in the public domain and there may be a few available as ebooks, but I don't have a reader so I haven't looked.
I would like to thank Peter Currane for his Ki-Gor bibliography and  Phil Stephensen-Payne and Galactic Central for the stellar Pulp Cover Gallery.
The Ki-Gor stories I read are pure adventure fiction, there are no supernatural powers or science fictional elements. If I find more Ki-Gor, I will read it.
Ki-Gor -- King of the Jungle 7.5 out of 10.
Ki-Gor -- And The Stolen Empire 7.5 out of 10.
Cromba Has a Thousand Spears 6 out of 10.
The Golden Claws of Raa 7 out of 10.
Posted by Pete Miller at 11:08 PM