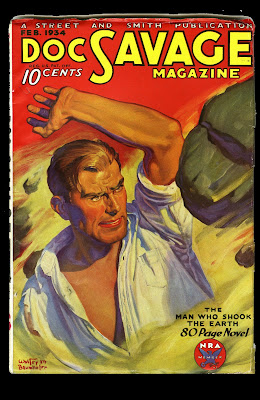 February, 1934
The Man Who Shook the Earth

Johnny regains his sight in the twelfth adventure of Doc and his friends. The surgery is performed by Doc Savage himself. Johnny is unwilling to get rid of his glasses with the magnifier, so he wears them on his head.

We also get a few more details about Ham's apartment at the Midas Club, a private club for the rich and powerful in New York. It is at the club's restaurant that we meet this issue's femme fatale, Tip Galligan. who believes that Doc has captured her brother. She holds a gun on them. "From the gun, Monk looked to the girl's clinging gown. The exotic golden garment exposed every ravishing curve."

As usual, Monk and Ham argue over the girl, who wants nothing to do with them. She is attracted to Doc, but he has sworn off women because of his world-traveling mission and the daily dangers he encounters. Women are one subject that even Doc would admit he knows nothing about.

This supersaga has Doc and his men travelling to South America to investigate unnatural earthquakes in Chile that are killing men involved in the Nitrate mining industry. I had read only a few chapters of the story prior to the recent tragic real-life quake in Chile.

The quakes are murdering the owners of the Nitrate mines and the people taking over are all new-comers to Chile, and all "from one particular country... which is considered a possible instigator of a future war," according to Renny. The villainous group is called, "The Little White Brothers" and their goal is to bring the war "to give us our rightful place in the world."

I found it interesting that the novel is clearly talking about Germany, but doesn't come out and say it. Not yet, anyway.

The leader of the Little White Brothers finally says, "I... will be elevated to dictator of my country when the great war comes. Perhaps I shall be dictator of all nations in the world. Mussolini -- Hitler -- they will be nothing as compared to me!"

This passage is the first account I have noted that brings to light the feelings that as early as 1933 those two dictators were considered a global threat. This was written a good five and a half years before Hitler invaded Poland starting WWII.

I found the earthquake causing machine to be the greatest villainous creation so far in the Doc Savage canon and was glad to see its implications recognized as being able to upset the balance of power in the world.


Fortunately for us, Doc Savage was there to stop the menace and keep the world from being at war for years to come.

I did find they plot to be confusing at times, so I am giving this adventure a 7.5 out of 10.

The pulp cover is by Walter Baumhofer and the Bantam cover is by James Bama. The interior pulp illustrations are by Paul Orban. Thanks to Chris Kalb for posting these on his great Doc Savage site. 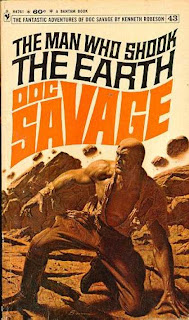 For this review I read my Bantam paperback first edition, December 1969.
Posted by Pete Miller at 4:09 PM