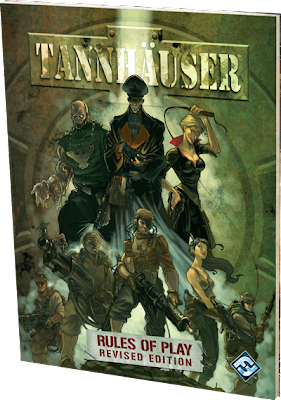 It has been more than four months since FFG had a news announcement regarding their alternate history boardgame, Tannhäuser, but on Monday they posted a major news item.

The revised rules for Tannhäuser are on the way. They are "at the factory" according to FFG's "Upcoming" page with a Spring 2010 expected release. That should get the book out by late June. Hopefully they'll put the .pdf up for sale sooner.

The Daedalus Map Pack is still listed as "in design" with a Spring 2010 release. I anticipate a Summer release (any time before Sept), but who knows...

The new rules, a 96 page full color book, will be available as a printed volume for $10 (the price originally advertised was $5) or as a .pdf for $5 (originally advertised as free.). The rulebook is a complete rewrite and has many revisions and new rules. The updated rules also include material from the individual figure packs and Operation Novgorod.

From the FFG announcement, "One final note: Although we previously revealed an intended price for this new rulebook, we found that over the course of the production process, our costs were slightly greater than expected. That being said, when this exciting resource becomes available later this spring, you’ll have two purchasing options: as a pdf download for only $5, or as a printed copy of the rulebook available through your local retailer and on our webstore for $9.95."
I have no problem with them charging $10 for a 96 page full color book, but the .pdf should be free. You can't play the game without the rules and in my opinion game companies should make the rules available for free. In this case in particular as the rules are not the same ones we got when we bought the game from FFG. This is no small revision. They are changing the basic rules as well as the rules for many of the objects in the game. They should honor their free .pdf offer.

A 20-page preview .pdf is available now on the Tannhäuser support page. I am pretty happy with the new game rules which are fairly complete in this section. I think the game will play smoother and be more fun in this new iteration. While they are keeping all the components of the original game, there are quite a few changes to the rules and without seeing the equipment descriptions, I am sure that many of those will change as well.

Here is an overview of many of the rule changes.

Command Points
These replace Victory points. You get 2 per turn, and they are refreshed each turn. You can't accumulate them, but some equipment will give you additional points. The Command Points allow you to take special actions.

Packs
You now have a choice of Combat, Stamina, and Command. Tokens are put on the slots facedown until all players have chosen. Then all the tokens are revealed at the same time. After that, Bonus tokens are chosen, up to 3 per faction.

Rush and Go (Optional) - When there are 4 entry points, each side gets 2 and uses both of them equally.

The term 'Sequence' is gone. Characters are 'Activated' and take their turn. 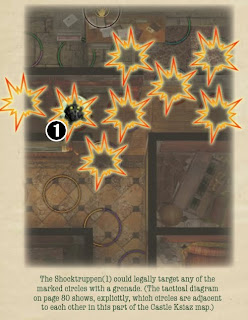 Grenades can be thrown into rooms and around corners. From the rule book, "When a Grenade or Smoke Grenade is thrown, the throwing player chooses a target circle. The target circle must be within the relevant range (see the sections that follow), and all circles through which this range is measured except the last circle must share a path with the throwing character. (The last circle may share a path, it is simply not required that it do so.) This method of targeting represents a grenade bouncing from one area into an adjacent room or hallway."

Overwatch is added. At the beginning of the turn you place a figure on Overwatch by spending 1 command point and marking the character with a token. You may put as many characters on overwatch as you would like (and have Command Points for) but those characters do not get a normal turn.

During an opponent's figure's Activation, if the opponent took an action on your character's path or an adjacent circle, your character on Overwatch may pause that characters action to perform an attack of their own. Since you paid a Command point for the Overwatch, it does not cost another Command point to take this interrupting attack. Nifty. FFG listened to the fans on this one and I couldn't be happier with the rule. Now a character can't just race into a room and try to kill everyone with a grenade, and leave.

Grenade tosses are not attacks and therefore not available as an Overwatch action.

Smoke lasts 3 turns - the turn thrown and the next 2 full turns. This helps the Reich.

There are no minimum ranges. This helps the Union.

Unused objective tokens are suggested for marking activations and overwatch. 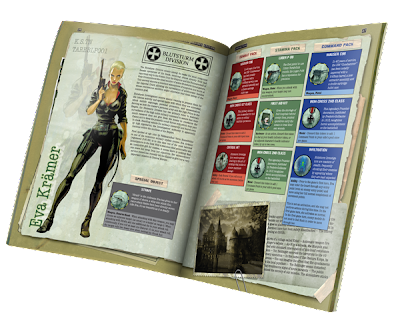 Looking at the Eva Kramer character pages it is clear that there are differences in the packs. In the original she had the Luger in the Mental Pack. Now she has the Mauser. I also like that they put the full rules for the items each time they are shown.

The new layout will make it really easy to print out the .pdf on cardstock and cut up the items for reference, already pre-color coded by pack.

I think that the reboot of Tannhäuser will bring more people into the game and now that it is FFG's property they should give it some love. I hope so.
Tannhäuser and all related characters are trademarks and © Fantasy Flight Games.
Posted by Pete Miller at 9:03 PM

Great news. Thanks for summarizing it up. Can't wait to get Tannhauser back into my gaming lineup.

I hope that with the release of the revised ruleset we'll get a new spree of fan-made resources !

No release date from FFG. They don't really do that. They list a season - in this case spring which leaves them until June 20th to be on time.

I am unwilling to do any updates or create any new material until I have the full rulebook in my hands, however, reading the new rules has already given me ideas.

Thanks as well for the summary. My Tannhauser boxes have been patiently waiting for a working set of rules. Got my fingers crossed, as it sounds good so far. :-)