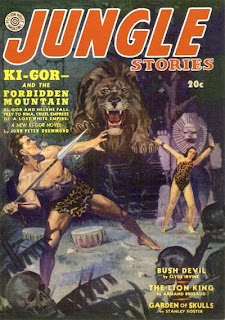 Back in March I gave the Pulp of the Week treatment to Ki-Gor, the Jungle Lord. What I didn't mention at the time was that I was reading a bunch of Ki-Gor novels as research for a Ki-Gor story that I wrote and turned in to Airship 27.
The story has now been accepted for the upcoming Jungle Tales, Featuring Ki-Gor, the Jungle Lord Volume One from Airship 27 and Cornerstone books. They are the fine publisher of many new pulp stories including the Green Lama book containing my story, The Studio Specter, in the Amazon ad featured on the right. The Jungle Tales book is slated to include 3 Ki-Gor tales, including mine.
Readers of this blog may recognize two of the supporting characters. The first was mentioned in the earliest post of this blog. The other is a mercenary that gained travelling companions in Africa and has more than his share of posts on this blog as well. A No-Prize to the reader who first names both in the comments.
Beyond Ki-Gor, I am working on stories featuring an investigator of my own creation named Clark Tyler in a tip of the hat to my great-grandmother. Clark always seems to run into something bizarre in his investigations. I've finished first drafts of two stories featuring Clark and am in the midst of the third. I hope to finish a book of Clark Tyler tales later this year.
Posted by Pete Miller at 7:54 PM

Congratulations! I look forward to reading the story when it comes out.

Love it - looks great. Between this and our upcoming Savage Beauty comic series from Moonstone, there seem to be a jungle resurgence!