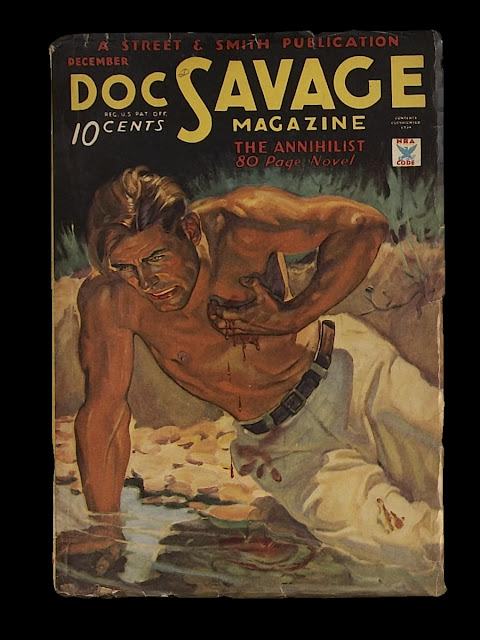 DECEMBER 1934 - THE ANNIHILIST
I have been making an effort to keep these Doc Savage reviews mostly spoiler free, however, this particular story demands to have the details discussed, so if you have not read "The Annihilist" and are planning to ever do so - DON'T READ the part of this article AFTER THE JUMP -  go read this supersaga because it deals directly with issues at the core of Doc Savage, those of the mysterious place in upstate New York, Doc's 'college.'
This adventure has Doc, his cousin Pat, Monk, Ham and Renny appearing. Long Tom is in Chicago and Johnny is filling in for the Natural Science chair at a famous university - one that is unnamed.
One of the issues discussed is that it would be very bad for Doc to have the existence of the college revealed. What he is doing is illegal and possibly immoral, but Doc feels that it is worth it to put men back on the street, not cost the state money, their past beyond their memory, and with skills to make an honest living. 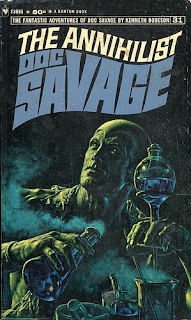 I don't think I read this book back in the day, but I purchased the Bantam #31, December 1968 first edition (cover price .50) for $2.50 at some point in my youth. The pulp cover is by Walter Baumhofer and the paperback is a brilliant piece by James Bama. I give "The Annihilist" a 9 out of 10 - mainly for the insight into Doc's college, but also for some great action sequences and story points. 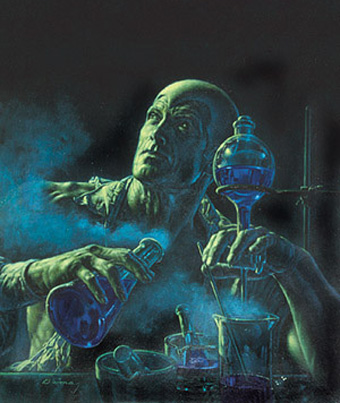 Read Spoilers and more after the jump.


The one area that Doc places himself above the law is that of his 'college' where the criminals that he catches are sent. The Annihilist deals directly with the college and discusses how the criminals are reformed.

The issue of the morality (or lack thereof) of the place is directly discussed. While it is illegal, Doc feels that it is worth rehabilitating those whose minds are malfunctioning. You see, criminal behavior is a medical issue. There is a gland in the brain that secrete an enzyme in some people that causes them to be criminals.

Some of these people are thugs and thieves and some are business men - corporate raiders and stock manipulators. One of the themes of the Doc Savage stories so far is that of executives as criminals - not surprising given that the Great Depression was ongoing at the time.

The head surgeon at Doc's college has gone missing and in New York City there are a rash of deaths that are connected only by their gruesome visage in death. The victims eyes are dangling from their sockets.

This pop-eyed death is causing a major panic in Manhattan. "Fifty people were killed the night before and New Yorkers are abandoning Manhattan in droves" and the papers are playing it up to the hilt. A brusque cop, 'Hardboiled' Hannigan, has been appointed to the case and after trying to question Doc about one of the victims (assistant to the previously mentioned surgeon) and with Doc evading his questions, Hanningan tries to arrest Doc.

As the story goes on, the populace becomes aware that it is criminals that are dying and people start to make up for previous wrongs - even turning themselves over to the police for things they weren't caught for, but hoping to make amends to stave off the pop eyed death.

The latter part of the tale takes place on and near the grounds of the college - but we never see inside. There is a large circular fenced area with an expansive  lawn where patients exercise and a large rocky cliff that seems to be a camouflaged building.

Near the end of the adventure, Monk is fighting Ham and starts to feel the pop-eyed death coming on, but he calms himself down and realizes that he can't attack Ham, that there is a bit of reality to Monk's threats.

Ham, on the other hand, relishes in this new freedom from reprisal and lays into the apish man with all the built up insults, knowing that Monk doesn't dare hit back.

In the end, Hardboiled Humbolt knows the secrets of the college, but will not reveal it.
Posted by Pete Miller at 11:01 PM