Pulp of the Week - The Windup Girl 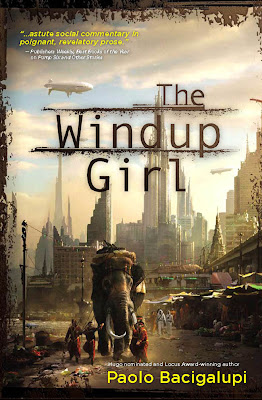 Pulp of the Week


The Windup Girl is the Hugo and Nebula award winning first novel (well, published anyway - Bacigalupi has said that he wrote many books before this one) that takes place in a post-climate change Bangkok, Thailand. The story sprawls out like the slums of the city that is protected from the rising ocean by sea walls and the Environment Ministry.

Gene-hacking companies had a war that killed off many plant species, but the Thai royalty protected their seed stocks for many years, relying on the White Shirt enforcers of the Environment Ministry. Gene-hacked mutations and diseases have ravaged the world's food supplies - and the calorie companies (corporate giants of the agri-business) that battle over the food stocks have been banned from Thailand.
Bacigalupi's book has a sprawling cast whose relationships slowly intertwine. The opening was slow going for me due to all the characters and especially all the Thai terms and names that took some time to sort out, but after I got through the first third the story really moved ahead and drove to an exciting and surprising conclusion. I really like the book. There is politics and intrigue and action and heroism. There is depth and intrigue and a smattering of explicit sex.
The principal players are the mysterious American factory manager Anderson Lake, his chief assistant, a barely tolerated 'yellow card' Chinese man named Hock Seng, the former Muay Thai Champion turned White Shirt Hero Captain Jaidee Rojjanasukchai, and Emiko - the Windup Girl herself. Windups are genetically engineered humans that have advantages and disadvantages over regular humans, but are without legal rights. She was created to serve, but she finds herself wanting more.

How a Windup ended up in the Thai Kingdom is part of the mystery, but Emiko lives in fear of the White Shirts and her current owner pays bribes to keep the Environment Ministry away.

The politics of Bacigalupi's post climate change and genetic engineering future are fascinating. Energy is provided by kink springs - tightly coiled springs wound up by genetically engineered elephants called Megadonts, clean Methane, and a lot of human power. The competition caused numerous wars and corporate conflict with the Thai Kingdom ending up a bastion of safety due to the Environment Ministry's unflagging war on genetic mutations and artificial constructs.

This is a great book and I couldn't be happier that an honest to God SF book has had as much success as this one has. It is SF in all the best ways. Social SF, hard tech SF, and a little bit of adventure.

I thought The Windup Girl was great and well deserving of the Hugo and Nebula Awards. Thank you Night Shade Books for printing this audacious novel and for choosing the brilliant cover by Raphael Lacoste. Night Shade is offering a wide range of SF and Fantasy. Hopefully The Windup Girl's success will push the mainstream publishers a fraction back toward SF.

I read my trade paperback copy for this review and I give The Windup Girl a 9 out of 10.
Posted by Pete Miller at 7:44 PM

Paolo Bacigalupi is being heralded as one of Science Fiction's best writers of recent years, having won and being nominated for multiple awards. His debut novel The Windup Girl caught my eye from the moment I heard the title. "Is this related to Steampunk," I thought? "Is it Green Punk?" Which only just before the release received any sort of specific meaning. It certainly sounded like it could be on both counts. I was further grabbed by the truly beautiful cover art by Raphael Lacoste. The final cover actually has a more yellow-tinged look to it to further evoke the smog like conditions of the city.

The Windup Girl is a extremely vivid dystopian future Thailand in a world besieged by food plagues and mistrust. Paolo's superb prose doesn't waste one word in describing the setting. The world has contracted and segregated itself. Everything bad that environmentalists now fear has come to pass. We have run out of fossil fuels, most animal life has died off, and there are massive food famines caused by various food born plagues some of which have terrible effects on humans outside of killing all the crops.